Dr. Wayne Dyer Asked Parents To Send Him Their Children's Memories Of Heaven

Editor’s Note: We are all deeply saddened by the passing of Dr.Wayne Dyer on August 30th, 2015, however, the excerpt below from Wayne’s most recent book, Memories of Heaven, illustrates perfectly his belief in far more than just this earthly experience.

I Believe In Angels.

I have had personal experiences in which I have been escorted out of extreme danger by beings who took my hand and led me to safety. And when my wife, Marcelene, was giving birth to her first child, she was assisted in her labor by a nurse whom she could describe in great detail—but it turns out that no one who worked in the delivery room at the hospital had ever seen this nurse.

I have been to the site in Lourdes where St. Bernadette had 18 visitations from an apparition of the Virgin Mary. I climbed the mountain in Medjugorje where six children saw the same vision of the Blessed Mother, and are still seeing her regularly almost 35 years later.

The spiritual literature is replete with references to the presence of guardian angels who are available to assist us on this temporary journey here on Earth. In the ancient sacred text called the Talmud, there are these words written back in the 8th century: “Every blade of grass has its angel that bends over it and whispers, ‘Grow, grow.’“ Surely if the grass in the field has angelic guidance available to fulfill its purpose, there ought to be celestial counsel at one’s disposal for all of us humans as well.

In the 13th century, the brilliant philosopher St. Thomas Aquinas offered us this penetrating understanding about the presence of angels among us: “We are like children, who stand in need of masters to enlighten us and direct us; God has provided for this by appointing his angels to be our teachers and guides.” The children’s reports reflect the truth of what this eminent scholar writes about the presence of God’s emissaries among us, containing many references to the sightings of angels and delivered with absolute certainty and wisdom. Perhaps because young children have not been conditioned to believe otherwise, they are able to see and feel this guidance, whereas others who are shaped by fear and doubt remain in a state of blissful ignorance.

My all-time favorite poet, William Blake, used the imagery of angels throughout his vast collected works. Here is what he wrote concerning the presence of angels in the lives of children: “The angel that presided o’er my birth / Said ‘Little creature, form’d of joy and mirth, / Go, love without the help of anything on Earth.’” These sweet loving beings we have come to call angels are certainly not of this material world. Blake asks us to listen to these immortal beings who not only preside over our births, but are with us for the length of the entire journey as well. Remember, just because you can’t see them, this does not mean that they’re not there. After all, the guidance comes not from anything here on Earth.

Just ask your children, or your own open-minded inner child.

Here are just a few of the stories from the book. 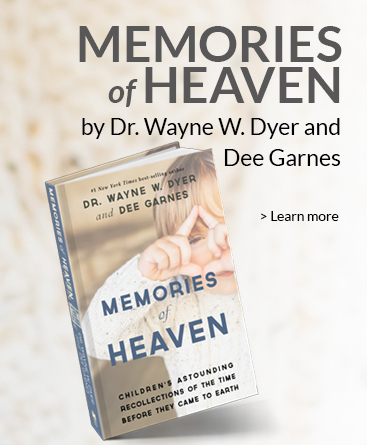 My youngest daughter used to have conversations with angels every night. One night when she was just two and a half, she asked me to tell them not to have so many in her room because she was tired and wanted to sleep some more. I told her to ask the angels not to stay that night, and we did it together. The next morning when I asked her how she slept, she told me that only “Michael” had stayed at the foot of her bed to help her sleep more peacefully. I got chills, knowing who Michael was. When she noticed my reaction, she said, “Yep, Mommy, he’s my favorite, too!” I’d never told her angel names—I always let her tell me.

I have two babies. My eldest, who is three years old, says a lot of things that sometimes sound weird but are quite intuitive. For example, I have an old photo album with pictures of my parents and family, along with my husband’s family. He loves to see the album and one day said, “Momma, those are my angel grandparents who live in Colombia.”

I was surprised because my mom died 11 years ago, but my dad passed just 7 months ago and I never told my son about that. Anyway, I said, “Yes, honey, they are angels.” Last week he suddenly said, “Momma, my angel grandparents said that they take care of me but aren’t taking care of you anymore . . .”

Every time he says something like this, it leaves me without words.

I was on the way to drop my four-year-old, Marc, off at day care. We drove for a while and then he said, “Mommy, you are so beautiful.” I thanked him, and he said, “Yes, you are so beautiful with all of the angels around your head!” When I told him that was very sweet, he insisted, “Mommy, they are all around your head,” and then looked down to keep playing with his toy like it was no big dealThere was such a feeling of love in that car I cannot

begin to describe. I will always remember that special morning!

I have identical twin daughters who are now 21. When they were between the ages of two and three, I was getting ready for work. The girls were playing, and talking with me while they watched me apply my makeup. One of them said, “Mommy, now that we eat real food, the angels don’t come as often.” I asked what she meant, and the other one replied, “Now that we don’t drink milk out of bottles and we eat food, they don’t come as often.”

This really blew me away because at that young of an age I knew they had no concept of what they had just said, and were merely speaking the truth!

Open Yourself Up To Angelic Guidance.

This is accomplished by aligning yourself with the Divine realm. Lao-tzu, the philosopher and poet of ancient China, says that if we wish to become Divine beings ourselves, then we must restore our Divine qualities through virtue and service.

I believe that young children are examples of beings who see and feel the presence of angels because they live virtuous, nonjudgmental lives. It seems that this angelic communication that little boys and girls report so frequently comes to them without their seeking. And this is in large part because angels recognize their own Divine qualities in those who have yet to be victimized by their own egos.

As Lao-tzu tells us, taming our egoistic inclinations is the only way to gain the attention of the immortals who instruct us in what is necessary to reach the Divine realm. Our children seem to have this awareness, so I urge you to emulate their virtuous qualities and note the angelic presences that will begin to show up for you.

Have your children or grandchildren ever mentioned their Angels? Feel free to leave a comment or story below.