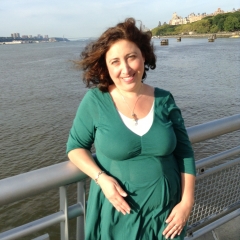 It was May, 2002. I was living in Washington, D.C. and working as an attorney for a labor union. Over the course of just four months, my life had come crashing down around me. A reading that I had scheduled with psychic Sylvia Browne years before miraculously arrived just as I realized that the life I had known was gone, taken from me by a freak exposure to toxic mold. I was devastated.

In the midst of this chaos, the phone rang. On the other end of the line there was Sylvia, with her soothing, gravelly voice, assuring me that I would be okay. Not only would I be okay, she said, I would be leaving Washington, D.C. soon and moving to New York City--which had always been a dream of mine. "Impossible," I said, and began listing all of the reasons why it couldn't happen. Unfazed, she explained that I would be moving to New York City in a year and a half, and "later, you'll write."

I was flummoxed. "Write? Write what?" She answered, "You know, once upon a time. And don't take this the wrong way, honey, but you've had a lot of royal lives. That's why you're kind of your own thing." I wasn't sure whether I should be annoyed or flattered. I hung up the phone thinking that this was all very intriguing, but I just couldn't see what she had predicted happening.

Fast Forward A Year And A Half
I became sicker and sicker, and in an attempt to find a position that was a better fit, my employer suddenly transferred me to our New York City office. Eventually, I became unable to do that job as well and had to stop working. That’s when I began to write. The spirit of Ben Franklin showed up in my kitchen and gave me the interview that launched the book Conversations with History: Inspiration, Reflections and Advice from Celebrities and History-Makers on the Other Side. One year, and 22 spirit interviews later, I finished my book, which was published by Hay House on August 11, 2014.

Thank You, Sylvia!
Sylvia's predictions turned out to be exactly right. But there's more to this story: Sylvia's groundbreaking books and work brought psychics and mediums like me out of the shadows and into the light. It's rarely easy for pioneers like Sylvia to be accepted. Even though I have written a very unusual channeled book of celebrity interviews, I have enjoyed mostly great acceptance and curiosity from others, including the media. I am sure this is due in no small part to Sylvia Browne's prolific writing about all kinds of psychic phenomena, mediumship and the afterlife; regular television appearances; and frequent traveling all over the world so people could experience her gifts firsthand. She was proof that people who were psychic and who could talk to spirits were not scary. She paved the way for people like me to continue this work with relative ease.

When she passed, on November 20, 2013, at the age of 77, I was heartbroken. I reached out psychically to see if I could talk with her and there she was. Her spirit was visiting people prior to her crossing over. She was happy, she said, because she did what she came here to do: she brought mediumship and psychics "out of the closet." She then said a few kind and supportive words, wished me luck with my book, and moved on.

I felt as if I lost a mentor, as well as the angel who came to me during my darkest days and gave me hope for the future. Happy Birthday on October 19th, Sylvia Browne! You are missed. Keep having fun on the Other Side with all of your dogs, minus those nagging back and teeth problems I keep hearing about as I'm writing this article. And please come back to visit soon.

Sylvia wants to remind everyone to "be yourself and don't worry what other people think or say. You just can't control that, so don't even bother trying. Just keep following your heart. Do what you came here to do. And remember to get out and take a walk and enjoy the marvelous sunshine on earth! Sending love and a big hug to you."

Susan Lander is a lawyer, writer, and psychic medium who spent 20 years in the legal field before transitioning to a career honoring her very special gift: the ability to communicate with spirits. A lifelong psychic and a message medium, Sus Continue reading