Are The Foods You Eat Making You Sick?

Are The Foods You Eat Making You Sick?

3 Ways To Reboot Your Health

Most people I talk to are downright confused and frustrated about what to eat and why. Is whole grain the staff of life, or can it damage the brain or the gut? Is wheat a particularly scary bogeyman or not? Is eating an egg really as bad as smoking a cigarette? What about meat? Dairy? Fish? Soy? My intention is to give you the information you need to decide which of these foods are right for you. 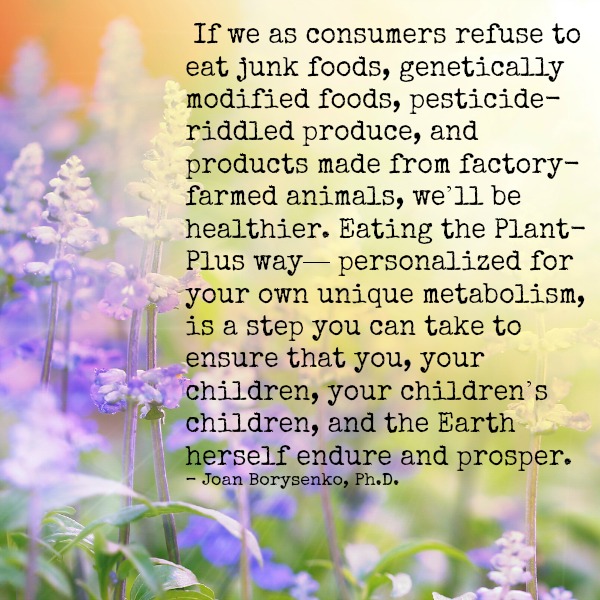 Before I tell you who I am and why I’ve spent three years researching and writing my new book, The Plant-Plus Diet Solution, let me tell you who I’m not. I’m not a physician, nutritionist, or chef. I have no supplements to sell, nor any ax to grind. I’m a regular person who got a diagnosis of hypertension at about the same time my husband, Gordon, discovered that he had plaque in his arteries, putting him at risk for heart attack and stroke. We decided to see if changing our diet might help.

That was the beginning of several years of concentrated diet sleuthing. First we tried a low-fat, high-carb, mostly vegan diet. After 14 months of sticking resolutely to that heart-approved program, unfortunately, we continued to lose ground. My hypertension worsened, and while some of Gordon’s cardiac indicators improved, others got worse. To add insult to injury, we both gained weight. While many other people, including President Bill Clinton, thrive on a high-carb, low-fat diet—and there is solid research to support it for people with heart disease—for us it wasn’t the hoped-for panacea.

It was frustrating to try so hard, and to believe in a diet with such evangelistic fervor, only to lose ground. So, using my Harvard Medical School doctorate in cell biology to good advantage, I dove into the literature on nutrition and got better acquainted with some of the disastrous national policies that shaped our health, and our approach to heart disease, over the past half century.

Ever since President Dwight D. Eisenhower was diagnosed with heart disease in 1961 and put on a low-fat diet, lowering dietary fat while increasing carbohydrates became nutritional dogma in spite of some mighty sketchy research. Yes, the rates of heart disease have gone down, but the experts don’t think that diet was involved. Less smoking, better emergency medicine, more long-term care, fewer cases of rheumatic fever, and healthier moms who bore higher-birth-weight babies are the likely causes of the decrease in heart disease over the past 60 years.

Ironically the very dietary changes that were put in place specifically to reduce the incidence of heart disease, which still claims the lives of one in four Americans, ignited an epidemic of obesity, diabetes, metabolic derangement, and Alzheimer’s disease instead.

We’re at a turning point where children now being born in the United States are the first generation whose life span is on track to be shorter than that of their parents. They are slated to live, on average, an alarmingly short 69 years. One single medical recommendation—to eat low-fat foods—spawned a high-carb feeding frenzy that may be the single most expensive mistake, in terms of both human suffering and economics, ever made in the name of evidence-based medicine.

3 things have to happen to reverse the health trends that are fast eroding both quality of life and our economy, both personally and as a nation:

1. Minimize refined carbs. It’s time to call off our national love affair with what some nutritionists call “crap carbs,” high-glycemic-index carbohydrates, devoid of fiber, which come from refined grains and sugar that send your blood glucose soaring. As you’ll read about in my book, these carbs are a major culprit in the health epidemic. Even whole grains can turn into sugar more quickly than some people’s metabolism can handle.

2. Eat a carb-reasonable amount of low-glycemic-index good carbs— the kind found in high-fiber whole vegetables and fruits. The most basic practical consideration that governs how to eat for your metabolic type is simple: Given the environment in which we live, does the combination of our genetics, our gut microbes, and the food we eat (plus other factors that have yet to be discovered) lead us to be (1) exquisitely insulin sensitive, (2) moderately insulin sensitive, or (3) insulin resistant? Simple blood tests can tell you. The more insulin resistant you are, the fewer carbs you can eat without deranging your metabolism and setting yourself up for chronic disease.

3. Personalize your diet for your unique physiology. Beyond eating a diet composed largely of vegetables and fruits, some people will thrive on whole grains and legumes. Other people less so. Some people can eat gluten, whereas others cannot. Certain folks can eat more fats than others, and fats of differing composition. Some people do well with dairy, and others not so much. And while meat is what I call a Plus food for many of us, it’s less suitable for others.

Why Is the Plant-Plus Diet a Solution?

What’s true for us in terms of our personal health and the health of our economy is also true for our planet. It’s in crisis. I’m not an alarmist, but it’s ostrich-like to dispute the facts. Earth truly is at a tipping point. Global warming, increasing pollution, and agricultural practices that deplete the soil, poison the water, and kill our beneficial bacterial allies (and eventually us) are hard to ignore. What we do to the Earth, we do to ourselves. Our elders, who are succumbing to an epidemic of Alzheimer’s disease, are like canaries in the mine. So are the increased number of autistic children. Are you overweight? Diabetic? Depressed? Anxious? You’re a canary in the mine as well.

Something has gone terribly wrong with our national health and well-being, and it’s high time for the tide to turn. The Plant-Plus Diet—a scientific, metabolically personalized, whole-foods approach to health—is also a solution to some of these pressing problems. If we as consumers refuse to eat junk foods, genetically modified foods, pesticide-riddled produce, and products made from factory-farmed animals, we’ll be healthier and so will our precious children. Furthermore, eating the Plant-Plus way— personalized for your own unique metabolism—is empowering. It’s a step you can take to ensure that you, your children, your children’s children, and the Earth herself endure and prosper for the good of us all.

Joan Borysenko, Ph.D., is one of the leading experts on stress, spirituality, and the mind/body connection. She has a doctorate in medical sciences from Harvard Medical School, is a licensed clinical psychologist, and is the co-founder and former dir Continue reading