The Message In The Madness

Editor's Note - Known to millions as the voice of TheDailyLove.com, Mastin Kipp shares his tender and tumultuous spiritual journey in his memoir, Daily Love: Growing into Grace.

Before I tell you about my Divine Storm, I want to define the term. A Divine Storm is a period of time (it could be a day, a week, a month, a year, or an era) where it literally seems like the whole world—the entire Uni-verse and even God—is against you. It’s a time when everything falls apart and there seems to be no way out. It’s a time of massive pain. Ultimately, Divine Storms come to clear out whatever is not a part of your next layer of growth. But depending on how stubborn you are, they can shake you pretty bad. 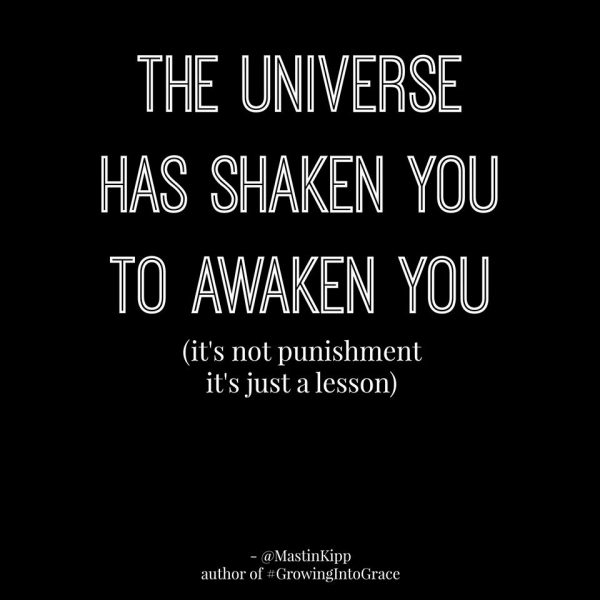 Here’s one of my favorite Daily Love tweets:
The Universe has shaken you to awaken you.

The Divine doesn’t act according to your own desires or expectations. The Divine knows you better than you know yourself. It sweeps in to clean the slate, to force you to give up what you have not been willing to surrender. In other words, when you utter the phrase “Thy will be done,” expect all hell to break loose.

My Divine Storm was upon me. I thought things were already as bad as they could get—I was losing my business, I had lost my best friend, and I was back on Adderall. But I didn’t know the half of it. What was coming next would test every shred of faith I had in myself and in the Divine.

Everything I had come to Love in this new “spiritual” phase of my life was being taken from me. It felt like God was pulling the rug out from under me, for no reason. The following events all happened over the course of one week:

• The Buddhist girl I was dating broke up with me.
• John and I ended our business relationship.
• Our company Love Yourself died.
• My roommate told me he was moving out in 30 days.
• Our initial investors in Love Yourself told us that they had lost 70 percent of their wealth in the stock crash and recession.
• My lower back went out.
• I got gout (yes, gout) in my left big toe.

It was one of the worst weeks I’d ever had. Worse than all those years ago when I was on cocaine and drinking all the time and got fired. Because Love Yourself wasn’t just a clothing company to me. It was who I was. It was my identity, and not just my identity, but also my mission. It was the way I thought I was going to inspire the world and change the course of many people’s lives.

In a matter of weeks, Love Yourself was gone. And everything else was gone, too. I had no business, no girl, almost no money, and no place to live. The only things I had were a lot of debt and a gout boot. (Try walking around LA wearing a geriatric ski boot and see how good you feel about yourself.)

I was spending more and more time at my hangout, Golden Bridge Yoga, even with the gout. That week I ran into the owner of Golden Bridge, a woman named Gurmukh. She told me that, according to Louise Hay, gout was all about the need for control. But what could I possibly be trying to control—except a life that was falling apart at the seams?

I was in a full-on crisis and it was really scary. It felt like God and the whole Universe were against me. So I quit the Adderall (for good this time), loaded up my Caroline Myss Spiritual Power, Spiritual Practice meditations, kept doing the Abundance Meditations, and hit the Kundalini yoga even harder.

One day while listening to Caroline, I had a momentary glimpse of an idea. What if this isn’t happening to you; what if this is happening for you? I don’t remember where I had read it, but I remembered her saying that your job is to say your prayer—and then see everything that happens after that prayer as an answer to that prayer.

So, what if my Divine Storm was an answer to my deepest prayer? What if my life crumbling around me wasn’t a punishment, but an act of pure Love? Could that actually be true? It seemed crazy to think so. I felt so lost, so abandoned, so alone. I just wanted to turn back. But a glimmer of hope had been sparked. To read more about what I did to heal after my Divine Storm, see my book, Daily Love, Growing Into Grace.