David Kessler
David Kessler is one of the most well-known experts and lecturers on grief and loss. He co-authored two bestsellers with the legendary Elisabeth Kübler-Ross: On Grief and Grieving and Life Lessons. (David was honored to have been at Elisabeth’s bedside during her passing.) His first book, The Needs of the Dying, a #1 best-selling hospice book, received praise by Mother Teresa. His services have been used by Elizabeth Taylor, Jamie Lee Curtis, and Marianne Williamson when their loved ones faced life-challenging illnesses. He also worked with late actors Anthony Perkins and Michael Landon. David’s work has been featured on CNN, NBC, PBS, and Entertainment Tonight; and he has been interviewed on Oprah & Friends. He has been discussed in the New York Times; and has written for the Boston Globe, the Los Angeles Times, the San Francisco Chronicle, the Wall Street Journal, and Anderson Cooper 360.

Coping With Grief From The Loss Of A Pet The story below is from You Can Heal Your Heart, Finding Peace After a Breakup, Divorce, or Death , a book I co-wrote with Louise Hay. Grief is a... Comments

The Spirit Lives On Both John Adams and Thomas Jefferson died on July 4, 1826 , the 50th anniversary of the Declaration of Independence. As our second president John... Comments

Are You Grieving The Loss Of A Job? When it comes to types of losses, a big one for many people is job loss. This probably comes as no surprise because we live in a world that confuses... Comments
View all 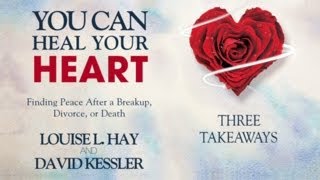 2743 https://i.ytimg.com/vi/7L5Tk5a-7aM/mqdefault.jpg
views
You Can Heal Your Heart: Three Takeaways

Watch as Louise Hay and David Kessler share major takeaways and affirmations to help you through the hurt of a loss.

In the tapestry of life and death, we may begin to see connections to the past that we missed in life. While death may look like a loss to the living, the last hours of a dying person may be filled no