A New York Times best-selling author and 2015 Templeton Award nominee, Gregg Braden is internationally renowned as a pioneer in bridging science, spirituality, and the real world. Following a successful career as a computer geologist for Phillips Petroleum during the 1970s energy crisis, he worked as a senior computer systems designer with Martin Marietta Defense Systems during the final years of the Cold War. In 1991, he became the first technical operations manager for Cisco Systems. For more than 27 years, Gregg has explored high mountain villages, remote monasteries, and forgotten texts to merge their timeless secrets. His discoveries are now shared in 33 countries and 38 languages through such paradigm-inspiring books as The God Code, The Divine Matrix, Fractal Time, Deep Truth, and his newest, The Turning Point. His 2007 bestseller, The Divine Matrix, was recently selected as the source for the made-for-television feature, “Entanglement,” and is now a textbook for college-level courses exploring new discoveries of science and our relationship to the world. Gregg is an active member of several leadership organizations, including the Evolutionary Leadership think tank, founded by Deepak Chopra in 2008. Gregg Braden has received numerous awards in recognition of his insights and innovation and is a 2015-2020 nominee for the prestigious Templeton Award. Gregg’s work has been shared on every continent of the world and in recent years he has presented his seminars and trainings to Fortune 500 companies, the U.S. military, international businesses and is now featured in media specials on the History Channel, the Discovery Channel, National Geographic, ABC and NBC.

A Life or Death Decision Made in The Heart Editor’s Note – Below is an excerpt from Human By Design – From Evolution By Chance To Transformation By Choice . In November 1997, I was scheduled... Comments

Reaching Our Turning Point - 5 Facts You Need To Know If you’ve ever been on a journey of any kind, then you know the routine. To prepare for the trip, you first get an idea of where you’re going. You... Comments

How Do You Pray? Prayer is perhaps one of the most ancient and mysterious of human experiences. It’s also one of the most personal. Even before the word prayer... Comments
View all 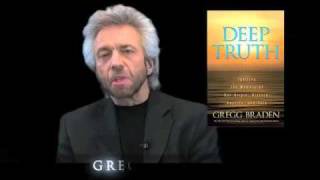 Deep Truth reveals new discoveries that change the way we think about everything from our personal relationships to civilization itself. When the fact

Gregg Braden, an acclaimed author and earth scientist, leads an enthralling tour of the lost teachings of the ancient Essenes, authors of the Dead Sea Scrolls. These compassionate seers, Braden teache

Save when you purchase this exclusive Gregg Braden Bundle which includes his latest DVD, Tales of Everyday Magic: Entanglement!