Joe Dispenza, D.C.,   first caught the public’s eye as one of the scientists featured in the award-winning film What the BLEEP Do We Know!? Since that movie’s release in 2004, his work has expanded, deepened, and spiraled in several key directions—all of which reflect his passion for exploring how people can use the latest findings from the fields of neuroscience and quantum physics to not only heal illness but also to enjoy a more fulfilled and happy life. Dr. Joe is driven by the conviction that each one of us has the potential for greatness and unlimited abilities.
As a teacher and lecturer, Dr. Joe has been invited to speak in more than 27 countries on six continents, educating thousands of people in his trademarked easy-to-understand, encouraging, compassionate style, detailing how they can re-wire their brains and re-condition their bodies to make lasting changes. In addition to offering a variety of online courses and tele-classes, he personally teaches three-day progressive workshops and five-day advanced workshops in the U.S. and abroad. Dr. Joe is also a faculty member at the International Quantum University for Integrative Medicine in Honolulu; the Omega Institute for Holistic Studies in Rhinebeck, New York; and Kripalu Center for Yoga and Health in Stockbridge, Massachusetts. He’s also an invited chair of the research committee at Life University in Atlanta, Georgia.
As a researcher, Dr. Joe explores the science behind spontaneous remissions and how people heal themselves of chronic conditions and even terminal diseases. He’s more recently begun partnering with other scientists to perform extensive research on the effects of meditation during his advanced workshops. He and his team do brain mapping with electroencephalograms (EEGs) and individual energy field testing with a gas discharge visualization (GDV) machine, as well as measure both heart coherence with HeartMath monitors and the energy present in the workshop environment before, during, and after events with a GDVSputnik sensor. Soon, he plans to include epigenetic testing in this research, as well.
As a corporate consultant, Dr. Joe gives on-site lectures and workshops for businesses and corporations interested in using neuroscientific principles to boost their employees’ creativity, innovation, productivity, and more. His corporate program also includes private coaching for upper management. He has personally trained a group of 40 corporate trainers who teach his model of transformation to companies around the world. He recently began certifying independent coaches in using his model of change with their own clients.
As an author, Dr. Joe has written Evolve Your Brain: The Science of Changing Your Mind (Health Communications, Inc., 2007), followed by Breaking the Habit of Being Yourself: How to Lose Your Mind and Create a New One (Hay House, 2012), both of which detail the neuroscience of change and epigenetics. His latest book, You Are the Placebo: Making Your Mind Matter (2014), which is an Amazon Bestseller and hit the NY Times Bestseller List within a week of its release, builds on his previous work.
Dr. Joe received his doctor of chiropractic degree from Life University, graduating with honors. His postgraduate training covered neurology, neuroscience, brain function and chemistry, cellular biology, memory formation, and aging and longevity. When not lecturing and writing, Dr. Joe sees patients at his chiropractic clinic near Olympia, Washington.

How To Become Supernatural Today we’re going to learn about how to become supernatural. Impossible, you say? Well, please stay with us as we discuss the possibility further. I... Comments

4 Beliefs That People Who Have Spontaneous Healings Share After years of interviewing people who have experienced spontaneous remissions and healings, I have discovered they share four specific qualities or... Comments

How To Find Your True Self One of the biggest lies we have come to believe about ourselves and our true nature is that we are nothing more than physical beings defined by a... Comments
View all 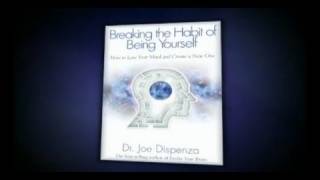 2715 https://i.ytimg.com/vi/eZaSEyvz6j8/mqdefault.jpg
views
Breaking the Habit of Being Yourself with Dr. Joe Dispenza

In Breaking the Habit of Being Yourself, renowned author, speaker, researcher, and chiropractor Dr. Joe Dispenza combines the fields of quantum physic

You Are The Placebo

Read documented cases of those who reversed their disease by believing in a placebo.

Breaking The Habit of Being Yourself - eBook

You are not doomed by your genes and hardwired to be a certain way for the rest of your life. A new science is emerging that empowers all human beings to create the reality they choose.