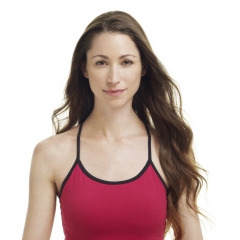 Tara is the founder and owner of Strala Yoga, widely known for its unpretentious, inclusive, and straightforward approach to yoga and meditation. Named “Yoga Rebel” by the New York Times, Tara Stiles has inspired a wide audience around the world with her healthy and relatable approaches to yoga, meditation, exercise, awareness, nutrition and every day well being. Tara has been featured in publications including Elle, Harpers Bazaar, Lucky, InStyle, Esquire, Shape, and Self, and has been profiled by the Times of India, The Times (UK), and Sweden’s Dagnes Nyheter. She is the personal yoga instructor to Deepak Chopra, whom she’s collaborated with to create the best selling Authentic Yoga iPhone app, Yoga Transformation DVD series among other projects. Jane Fonda named Tara, “The new face of fitness”. They partnered to re-launch Jane’s famous WORKOUT brand of fitness DVDs and equipment.

5 Steps To Kick Start A Healthier You Making your own rules is an empowering practice. When you get comfortable tuning in, following your intuition, and letting it guide you to your own... Comments

Doreen Virtue, best-selling author of Courage to be Creative and known for her work with the angels, is now sharing her expertise on bringing creativi

In Strala Yoga, Tara Stiles explains the origin and philosophy of this feelings-based style of yoga, which is spreading like wildfire around the world—from New York City to Barcelona to Singapore

Make Your Own Rules Diet - eBook

In Make Your Own Rules Diet, Tara Stiles introduces you to easy and fun ways to bring yoga, meditation and healthy food into your life.