Only when we open our souls. 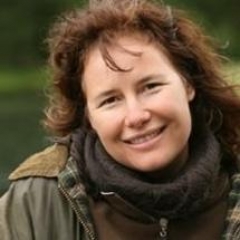 I found my special connection with the lions of Timbavati continued to grow. While ten years before I had had little conception of what “psychic” meant, and I had imagined it to be concerned with processes and phenomena that appeared outside physical or natural laws, I now understood psychic processes to be part of natural law. Given that the word psyche refers to the soul, I suspect that apparently psychic or telepathic connections between different species may represent communication at a soul level – with far-reaching implications in restoring the ancient bond between humankind and lions.

An event in Timbavati at around this time reminded me of this soul bond.

In February and March of 2000, thousands lost their lives in the devastating floods that ravaged Mozambique. Large areas of Timbavati and the Kruger Park (which borders on Mozambique) were badly damaged. The heavy rains fell unabated for more than two months. The earth was so sodden that even rangers in all-terrain vehicles stopped venturing out onto the roads for fear of getting trapped in the mud.

My sister, Serena, and the elder of her two daughters, Faith, had decided to pay me a visit in Timbavati. With them was Richard Wicksteed, a documentary filmmaker I had met during my shamanic journey who by now had become a close friend. After spending the first few days in the reeded huts listening to the relentless pummeling of rain on the thatch, we decided to risk a drive. After the information I had been receiving from psychic sources about my affiliation with the White Lions, I longed to see my special “winged lion,” Ingwavuma, again. I had visited Timbavati many times since his first appearance. Although he regularly found his way into my dreams, and although I had heard his roars on many occasions, I had not seen him again in the flesh.

The newspapers informed us that many thousands of people had drowned and many more had been left homeless. They made no mention of the animals that had similarly suffered. I was concerned that Ingwavuma might have been harmed in the flood but had no way of determining his whereabouts. Since his appearance on the air field runway, he had become the dominant male of the area, Timbavati’s lion king. But he had last been spotted in this region before the flooding began, more than two months before.

That night we decided to weather the storm, and head out for a game drive regardless. Restless after several days of being cooped up, we pulled on hooded rain jackets and set out into the drenched evening. Despite having four-wheel-drive, we took care not to leave the dirt roads so as to avoid getting stuck axle-deep in the mud. As a consequence, we saw no game whatsoever.

At my request our ranger, Rexon, drove us to the runway. Once there, we stopped the Land Rover. After shining his spotlight into the darkness as a standard safety precaution, the ranger allowed us to disembark. The rain had let up momentarily, and I sat with Faith, who was five at the time, on the wet tar. I told Faith that she and I were going to call Ingwavuma “in our minds.” We both closed our eyes, and I found I could see him clearly, just as he appeared to me in my dreams: a regal face, with an intense expression of wisdom and power.

A moment later, a lion started to roar nearby. Rexon, whose many years of tracking experience in the bush had taught him extreme caution, ordered us to climb back into the Land Rover immediately. We obeyed. That familiar primal excitement welled up in me as we drove in the direction of the roaring lion. We could not leave the dirt road, but it did not matter. We had no need to track the lion: the lion came to greet us.

Like a flash of gold in our spotlight, a living example of those beaten gilt masks of sun gods from ancient mythology, the lion stared straight at me with that fierce, all-knowing expression that I knew so well from my dreams. Rexon identified him immediately: Ingwavuma.

I was amazed and humbled. Of all animals, at that very moment, at that symbolic site in the midst of the Timbavati wilderness, under these weather conditions – my special lion declaring himself was a supreme occasion, recorded on film by Richard Wicksteed, who was sitting beside me at the time. Our group returned to camp in a state of mild euphoria. I was thrilled at the sight of my lion, and relieved that he was safe. Above all, I felt an almost umbilical sense of “connectedness.” The possibility that Faith and I had somehow called Ingwavuma in our minds was an idea that gave me a newfound sense of personal meaning in my life.

This was one of several signals that I had been given that, one day, I would be capable of crossing from my world into his, and back again. Shamans know that every living creature on this planet has a spirit or soul. The art of the shaman is to cross barriers, and among the most challenging of these is the apparent divide between the physical world and the spirit world. In the tradition of the shaman, I no longer feared dealing with the ancestral spirit realms. For some time now, my greatest inspiration had come from messages delivered through spirit sources, who seemed to guide my every step.

Linda Tucker lived a glamorous lifestyle as a model and then in marketing until a near-death experience in Africa change the direction of her life. Since then, after studying lions with African elders for over ten years, she has gone on to found t Continue reading