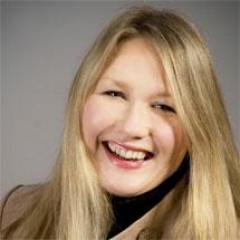 I once had a dream in which I was traveling on a fast-moving train. A small man came up to me and said, conspiratorially “Want me to show you how to drive this thing?”

Well I was curious so I followed him through the carriage to a control panel, which I’d never noticed before. He showed me a computer screen with what looked like a floating glass ball in a dome alongside it.

I watched him hover his hand above the dome then pull back and slowly move his hand toward the ball again. As he did so a map appeared on the screen and zoomed in until I could see the track ahead and the trees whizzing by. Smiling, he invited me to try. I wanted to know why I would bother to drive the train, as someone else was obviously doing a good enough job. We were moving, the track was underneath us and I expected to arrive at my destination on time.

“Because it’s your train,” he explained with some patience. “You can get it to take you wherever you want.”

“Oh! But what about the tracks?” I asked. “You lay the tracks as you go!” he laughed.

I awoke from that dream and then slipped straight into another with a similar theme. This time I was on an ocean liner, hanging up washing in the engine room. A cleaning lady came to me and handed me a key from the pocket of her apron.

“That’s the key to your ship.”

I was starting to catch on. “Are you going to show me the controls?”

“Oh there aren’t any controls as such, just this thing here.” And she used the key to open a cupboard housing what looked like a porthole.

“More of a GPS. You just look through here, decide where you want to go and your ship will take you there. She listens to your thoughts,” she said smiling.

Now if that wasn’t my inner wisdom sending me a clear message about tuning in and following my intuition, I don’t know what is! Life is full of so many miracles and if we can only learn to trust ourselves and craft our stories with care, we’ll be taken to magical places we only half dare to believe exist.

Andrea passionately believes in her motto ‘Change Your Words; Change Your World’and retrained as a Heal Your Life workshop leader in 2006, so that she could help more people re-shape their inner dialogues and take back the reins of their lives Continue reading