Breaking through the darkest hour. 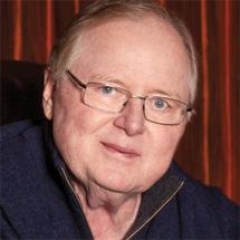 Dave Liniger had it all: four great children, a wonderful wife, a lifetime filled with adventure, and a successful company—RE/MAX—that had become the most prominent real estate brand in the world. And then, overnight, his full and varied life nearly came to an unexpected end. Doctors discovered a horrific staph infection that ran along his entire spine, leaving him paralyzed from the neck down and in excruciating pain. His book My Next Step is the remarkable journey of one man coming face-to-face with his darkest moments, from severe hallucinations to the fear of possibly never walking again.

Admittedly, those thirty-five days of hospital recuperation were tough, but I got through them without breaking. I tried my absolute best to be the happiest person I could be toward the nurses, doctors, therapists and technicians. It wasn’t easy, but the effort alone made a huge difference in my overall disposition. Given where I had been the past several months, I wasn’t going to complain. Instead, I used the time in the most productive ways I could think of. I had my daughter Mary write my schedule out on a white dry-erase board every day so I could see it, change, or adjust it if I wanted to.

I resolved pretty early on that I was going to be the best patient Craig Hospital had ever treated. I had always had a lot of stamina and never worried about doing the hard work in life. As I lay in bed, I likened my recovery to two of the greatest lessons I learned very early in my life after reading the book, Think and Grow Rich by Napoleon Hill. I was an impressionable sixteen-year-old kid who didn’t want to spend the rest of his life milking cows on our farm in Indiana. That book, which I’ve read more than forty times, has been a tremendous inspiration and influence in everything I have accomplished in business and in life. If you haven’t read it, I strongly encourage you to. And if you have, go back and read it again, because its lessons have held up over time and are as relevant today as they were when the book was first published in 1937.

Fifty years after reading that book, forty years of having actively exercised its principles, and thirty years of teaching from it brought me to two very simple lessons that have ruled my world. The first lesson is simple: Whatever the mind can conceive and believe, it can achieve. The second lesson is to write down any goal that is worth achieving, make it an obsession and convince your brain that you can accomplish it. Be sure that the goal is realistic, then decide what your step-by-step plan will be to achieve it. The lessons are really about being persistent, setting realistic goals and finding the right people to encourage you to attain them. As you start working toward your goal, you may have to stop, recalibrate, make adjustments and then get back to working toward that goal. But NEVER, ever give up until you reach it.

My first goal while at Craig was to get past those thirty-five days. My friends and family would be my support system to get me through, and my doctors and nurses would make sure I didn’t screw it up. My second goal was to tell everyone at the hospital that I would be going home by June 29th—and that I would be walking out of there on that day. The key thing to remember here is that I set my goals high, but I didn’t set them out of reach. There was a possibility I could walk again. Bear in mind that what is achievable for one person may not be for someone else. When you’re in a rehabilitation hospital with a spinal cord or brain injury, for instance, there are realistic goals and then there are those that can never be achieved.

My attitude was simple. In order to get to the work I really wanted to do, I had to get through these thirty-five days of hell. I knew I would never be able to learn to walk if I didn’t heal the hole in my backside first. I accepted the fact that I was going to be on bed rest for those five weeks and dealt with it by motivating myself to get to the other side. The mind is a very powerful tool that can work for or against you. This battle was every bit as mental as it was physical. I couldn’t let the darkness that came at night control the outcome of my days. I had to be fearless, fight through the pain, and face the unknown.

During those days, I was fortunate to have so many friends stop by to help me pass the time. A buddy from the Marines, who lives more than a hundred miles from Denver, came to visit me almost daily. Dave Fisher, a friend who is a police officer, brought me a galvanized steel bucket. “This is for your bucket list,” he said. “You have to start thinking about things you want to do before you die.” Inside, there was a message that read, “This is from your kids. Let’s go to Hawaii on vacation, and please take Officer Fisher with you!” I thought that was very funny. What I realized, though, was that I had no bucket list. I’ve already done most of the things I’ve wanted to do in my life. Every day people get up and read another National Geographic and say, “I would like to go do that,” but up until my hospital odyssey, I had the ability to go and do wherever I wanted, and I often did just that. I suppose learning to fly could be added to the list, but since I already have my pilot’s license, it would have to be learning to fly like Superman.

Dave Liniger was born and raised in the small town of Marion, Ind. Prior to starting his real estate career, Dave served in the Air Force and Vietnam. He first became interested in real estate after successfully buying and selling properties to su Continue reading