Immaculée Ilibagiza survived the Rwandan Holocaust and made a promise to God that she would tell her story. When her book  Left to Tell was published in 2006, she thought that she had kept that promise. She was thrilled to see the book in print and prayed that sharing her story would help others struggling with their own hardship, pain, and sorrow. She felt a deep sense of completion, as though she had come to the end of long journey. But the publication of her book was actually the beginning of a journey that has taken her around the world and put her on a spiritual path that she continues to follow and explain in her new book, The Rosary.

Within days of my book’s publication, I received an invitation to speak publicly before a large audience about the importance of ridding our hearts of anger and hatred through forgiveness. I was asked to talk about how I managed to forgive the killers that murdered my family. So many people approached me after my talk and told me that hearing my story helped them to forgive and heal that I knew my life had been forever changed. 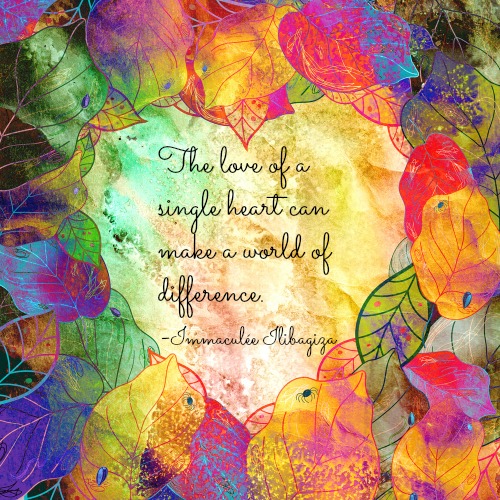 I resolved to dedicate my life to telling my story and spreading the message that all hearts can be healed through the power of love and forgiveness. It is a mission that continually enriches my life, introduces me to new friends, and presents me with endless opportunities to learn spiritual lessons that I share with others in places I never dreamed of visiting or even knew existed.

One of my first trips abroad was to Iceland, which is a country as culturally and geographically different from Rwanda as I could possibly imagine. Rwanda is not far from the equator and is often referred to as “the land of eternal spring” for its year-round temperate climate, sunny skies, flowering plants, lush forests and farmlands, and gentle breezes. Iceland is closer to the North Pole than to the equator and, at least to me, is well named because so much of the land is covered in ice! I saw very little greenery and was told that the sun sometimes doesn’t rise there for weeks on end, leaving the country in either darkness or perpetual twilight. Everywhere I looked I saw nothing but rock and snow and ice, except for the places where fiery smoke billowed out of the earth though great stony cracks, venting heat and ash from the volcanoes that are constantly churning underground.

The appearance of the people was as strikingly unfamiliar to me as the landscape—I had never encountered such gleaming white skin or shining blonde hair anywhere I’d been. Iceland’s savage beauty felt so alien that I wondered if my plane had become lost and I’d landed on an entirely different planet. There seemed to be nothing in the country that I recognized or that resonated with me, with one great exception: the hearts of the people I met.

Not long after arriving at the airport in Reykjavik, I was introduced to a woman who immediately placed her hand on mine and thanked me for writing my book. Her piercing blue eyes filled with tears as she told me about the pain she had been dealing with for many months. “A year ago I was diagnosed with cancer,” she confided. “The pain has been terrible and the treatments are even worse. I have been going through it alone, and there have been days I did not want to go on—I thought about ending it all. But then someone gave me Left to Tell.

“Reading about how you survived the pain of losing your family through prayer and forgiveness inspired me to begin praying myself. Those prayers gave me the hope and courage I needed to keep living and to finish my treatments. Soon I was able to let go of old resentments by forgiving people who had hurt me years ago. And that is when I felt myself beginning to heal and get well.”

I smiled at the woman and thanked her for her kind words, surprised that she had even read what I’d written, let alone been so deeply affected by it. A few minutes later I climbed into the car that

was sent to chauffer me during my stay. The moment I shut the door, the young man who had volunteered to be my driver turned to me and said,“Ms. Ilibagiza, reading about the love your father had for you and your mother and brothers has inspired me to become a more loving father and husband myself. I realized that something was missing in our lives, and that something was God. Now I take time to pray with my family every night, as your family did . . . your story has made me want to be a better man. Please keep sharing it wherever you can.”

Hearing two such personal and moving testimonials had a profound effect on me. How could these people from such a cold and distant land be moved so deeply by the story of a girl from a remote village in a tiny and impoverished African nation? At that moment it became clear to me that people everywhere, no matter the color of their skin or climate of their country, hunger to fill their hearts with the love we find only when we turn our hearts toward God. As it turned out, my book was a bestseller in Iceland. And before I left the country, I ended up meeting dozens of people who embraced me warmly and shared their own heartfelt stories with me, many of which moved me to tears and convinced me that my life was moving in the right direction.

healing | immaculee ilibagiza | the rosary | left to tell
About Author

Immaculée Ilibagiza was born in Rwanda and studied electronic and mechanical engineering at the National University. She lost most of her family during the 1994 genocide. Four years later, she emigrated to the United States and began working at th Continue reading