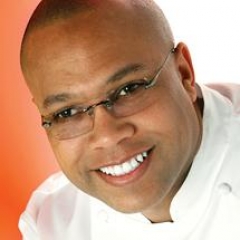 My dining experience around the country has brought me to the conclusion that every region in America has its own take on the soul food experience. Over the decades, soul food has changed in many ways, with even the very name of the cuisine being the subject of debate. While few would likely argue that these recipes reflect the African American culture (even if they are enjoyed by everyone), these foods are considered part of “southern cuisine” as often as they are considered soul food. While many of these foods are commonly prepared in the southern states, this type of cooking has never been limited to that region—not during the slave days and certainly not today. There are, however, some very unique local versions of the cuisine that do represent African American foodways specific to certain regions, like low country cooking that spans the Carolinas, Caribbean soul in Florida, Creole in Louisiana, and so on.

I’ve reached deep into my Louisiana roots for the inspiration that defines my own approach to soul food, which I call Posh Urban Cuisine. It’s a California-French style combined with my African American experience. I’m a classically trained chef but remain true to who I really am, and that’s what you’ll find on any plate of food I serve you.

The America I AM Pass It Down Cookbook is filled with recipes that reflect the need to document and share our history and culture that stretches back generations, even as we continue to create our future identities—which is a significant part of what defines us as African Americans. As a people, it is imperative that we record our culinary contribution to the fabric of America in the past and going forward. The recipes here range from southern-inspired soups made of the best vegetables from the family garden, or those that use ingredients that were left over in the ice box. I often use leftover pot lickers from my slow-cooked collard greens as a base for my sweet potato soup, and for various other quick and easy soups or bisques. We have more choices today than 50 or 100 years ago—there is some great produce that’s grown and sold locally—but we’re still sensitive to price and, if you’re like me, we don’t waste anything.

The collection of recipes I included in my book is accompanied by personal stories and life experiences, many unique to the African American community. These recipes reflect the people who provided them for the project, and give us a window into our community. An historical cookbook like this one wouldn’t be complete without this personal factor, connecting the heart and soul of the recipes with their contributors.

As I traveled across the country gathering recipes and preaching about the importance of passing down such a collection, I met many amazing people who shared their food stories. In Atlanta, while shopping in a Publix for ingredients for a cooking demonstration I was doing later that evening at the annual Black Arts Festival. I got into a conversation with an elderly white woman (she must have been in her mid-70s) as she was making her way through the baking section. Given where we were (in a supermarket in the south), the conversation quickly turned to southern cooking.

What I learned from her was that southern white folks’ cooking was not much different from black folks’ cooking. I was taken aback by the tips she offered me. We talked about canning peaches and the best way to cook collard greens using scrap meat. She even told me that fried chicken is best if cooked in pork fat. Wow, I thought, that’s very interesting.

While not everything she said was new or something I’d do in my own kitchen, I was really touched that she would so readily pass along such personal advice.

For centuries, it was this kind of sharing that kept our folks going. On a daily basis, such exchanges happened at the evening supper that brought family and friends together for the main meal of the day and conversation. Growing up in poverty, supper was the one daily event that put a smile on our faces. No matter how poor folks were, supper was grand for most. We’ve lost a lot of traditions, but that’s one that I try to hold onto. There are other, smaller things I realize still connect me with my family: just like my grandparents, I’ve always had an old mayonnaise jar in the freezer filled to the rim with seafood gumbo, or several casserole dishes in the refrigerator. Many dishes I serve come from my present experiences as a chef and a man, but very few of them reflect who I am more than the foods of my past.