Let go of your mental garbage. 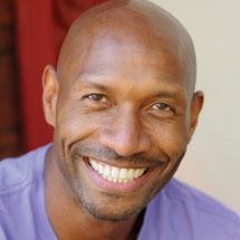 One day, when I was 15, I experienced such a miracle: an instantaneous revelation of the truth of my being. For me, the revelation happened through music. On that day, I’d gone to my friend Vanessa’s house on Taylor Road to hang out.

Vanessa greeted me at the door, then went into the living room and put on a Donny Hathaway record. I didn’t know who Donny Hathaway was at the time. But when I heard the first notes of “A Song For You,” something bolted awake inside me. I remember saying to myself, “One day I’m going to sing like that.” I was a star athlete and a straight A student at the time. There was absolutely no indication that I would do anything creative with my life. But still, Donny Hathaway’s voice connected with the voice of spirit within me, the part of me that had subconsciously held on to the awareness of my divine purpose. Although I didn’t understand it for many years, something beautiful and powerful was activated within me that day.

As I listened to Hathaway, I forgot about everything. The effect his voice had on me was immediate. It was as though I was really hearing music for the first time in my life. I felt like I understood exactly what he was feeling with every note he sang.

Though often full of haunting shadows, the stories he told with such conviction through his music were incredibly vivid. They were filled with rich, dusty orange tones like the last moments of sun before it melts behind a mountain range. I was so moved that I went out and purchased every Donny Hathaway cassette I could find.

I listened to his music hours upon hours. I couldn’t have explained to anybody what this passion for music was, but I knew that if nothing else, this was music that I needed to listen to. I needed to hear it. It seemed like he was singing the tune of my life: The sharp sadness, the loneliness and the feeling of not fitting in. Even when I was in familiar environments, the nervous unsettling in my stomach seemed to overshadow the happiness.

I couldn’t explain the feeling to anyone. I didn’t understand it myself. The only thing I could relate it to was the feeling of being left in the dust during an innocent footrace with my older brother in our backyard. For some reason I always felt I was being left behind, like I was always trying to catch up to that elusive something in my life.

In hindsight, I understand that such feelings and insecurities occur naturally when the voice of connection and self-expression has been silenced, because it’s the voice that tells us why we’re here on this planet at this time. When we don’t listen, or don’t understand what we’re hearing, it’s very easy to feel separated and anxious. That’s when the chattering voices take off and the mental garbage begins to pile sky-high.

There may be dreams and visions that you’ve held hostage since childhood. For whatever reason, you may have had the impulse to dream beaten out of you by experience. You may have thrown away those moments of spontaneous brilliance as void, thinking they’d go away forever. I’m here to tell you that they won’t. They are as near to you as the very air you breathe.

Rather than assuming that the spark will eventually die out, or has already died out, know that the real process revolves around releasing the layers of debris that have smothered its glow.

When a person releases the false voices, even if only for a second, and experiences the revelation of the authentic nature of his or her being, it’s nothing short of miraculous.

We often stumble through life trying to force miracles, when there are miracles happening around us all the time. That energy never goes away. It’s the energy that says you can do and be anything that you want to because you’re brilliant! (And not from a place of expectation or anticipation, but from a space of loving acceptance grounded in spiritual principle). But we have to peel back the layers to get to it. Some layers are harder to peel back than others. Some layers, when we peel them back, squirt in our eyes and make us cry. There are often the greatest lessons in those layers.

Charles Holt is an actor, singer, and producer who has starred in some of the most celebrated productions in American theater history including Smokey Joe's Café, Jesus Christ Superstar, and The Lion King. He was the first African Ameri Continue reading