How Crystals Work: The Science of Crystal Healing

How Crystals Work: The Science of Crystal Healing 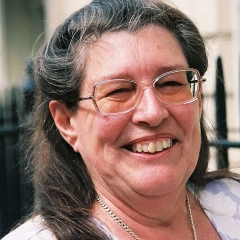 No one can yet say categorically how crystals work, although there have been many suggestions based on vibrational resonance and the water and crystalline content of the human body. 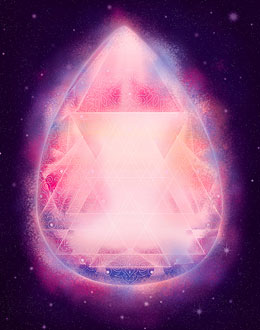 At the simplest level, many crystals contain traces of therapeutic minerals that pass across the skin barrier to bring about physiological changes. Kunzite, as already mentioned, contains lithium, which is used by doctors to medicate depression and bipolar disorders. Crystal users hold Kunzite or place it on their heart and feel uplifted.

Similarly the copper content in Malachite alleviates arthritic discomfort – although too much is toxic. It’s a matter of maintaining the balance. However, as Michael Gienger puts it, crystals are actually an information system that radiates energy. Find the right information, and the correct crystal carrier, and the body will be brought back into balance.

As we have seen, crystals have an orderliness of structure at the molecular level, with each molecule vibrating at the same rate as all the others. Synchronization takes place so that all the units within the crystal – and every other crystal of the same type – vibrate in unison (a harmonic convergence). Each crystal type has its own fundamental frequency or harmonic note. This creates a coherent, resonant system with a stable frequency template. 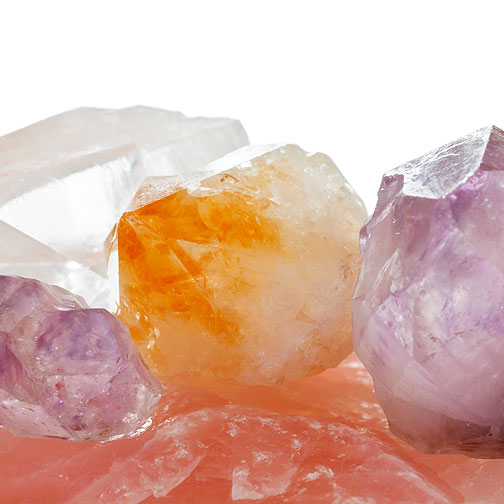 Coherent systems are difficult to disrupt. Even if there is disharmony or discord nearby, their energy remains stable – and can restore equilibrium to the disrupted energy.

Crystal energy is shaped, amplified and discharged from a crystal’s termination and goes out rather like ripples in a pond, creating a rhythmic pattern that pulses in harmony. The basic template can be modified or directed by other energy, such as magnetism, colour waves, intention or the power of thought, passing through it.

Scalar waves may well be the mechanism through which all energetic healing is effected. We’ll get to that in a moment.

At the most basic level, everything is energy. How it manifests is simply a matter of vibrational frequency and the crystalline structure (organic or inorganic) that enfolds it. The human body is no exception. It is a conductive energy system with crystalline structures in and around the blood, lymph and cells and it is repaired and maintained by a complex electrochemical system.

In other words, it runs on vibrations.

This is not only with regard to physiological processes. Emotions and thoughts also have their own vibration (see the work of Bruce Lipton and Valerie Hunt), which go out of kilter during stress and can distort an internal crystal lattice in the body.

Through resonance and entrainment, crystals can restore equilibrium to us. But there is more to it than this. Crystal healing works at a distance. A subtle electromagnetic current passes between a crystal and a person whether or not they are in physical contact. What links and activates them is, I believe, consciousness and intention.

Einstein coined the term ‘uniform field theory’ when trying to find an overall system that would link all the known forces in the universe with fundamental particle physics. But thousands of years before that the Hindu text the Mundaka Upanishad declared:

This description sounds exactly like the universe from the perspective of a quantum physicist or a modern mystic such as the systems theorist Ervin Laszlo, who says: ‘The primary “stuff” of the universe is energy and not matter, and space is neither empty nor passive – it’s filled with virtual energies and information.’ This also describes crystal energy. 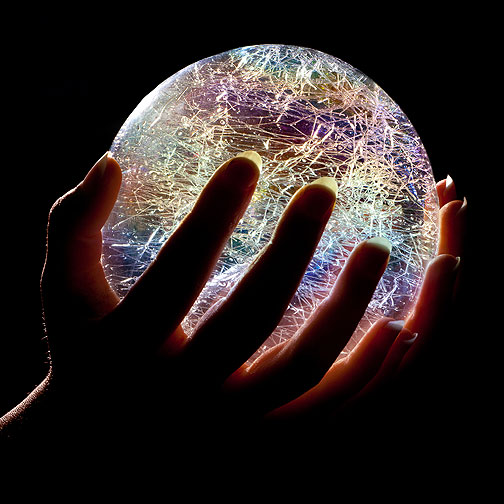 Consciousness: riding the crest of a wave

Quantum physics suggests energy is not continuous but rather exists as packets of energy – energy that behaves like particles and yet acts like a wave.

‘Consciousness is a huge oceanic wave that washes through everything, and it has ripples and vibrations in it. When there are acts of consciousness, the wave turns into bubbles at that moment, it turns to froth.’

He pointed out that everything, human beings included, was composed of quantum ‘froth’ and that under an electron microscope we would see:

‘A rather bizarre-looking light show, of things popping on and off, vanishing and reappearing, matter created out of nothing and then vanishing. And in that vanishing and creation, an electromagnetic signal is piped from one point to another point.’

This perfectly describes how I perceive crystal energy moving from a crystal to a body, or going out into the future to bring back information (in quantum physics, particles of energy move forwards and backwards, see below), or entraining two energy fields. 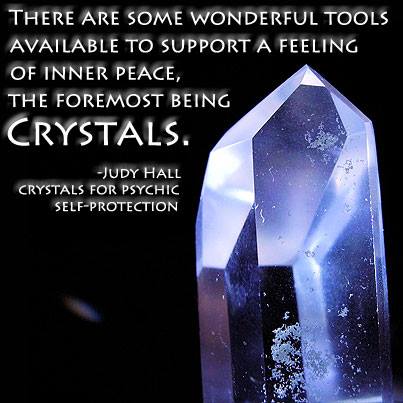 So, the crystalline structures in the body, especially its flowing tides of blood, lymph, intercellular and synovial fluid, can be entrained into a more perfect energy pattern.

Time and distance have no relevance here. Research has shown that the brainwaves of a healer and the recipient synchronize, or entrain, no matter what the distance. The same may well be true of crystals.

A crystal’s pulsing energy field has perfect equilibrium and its sympathetic resonance stabilizes a larger field through the energetic synchronization of two crystalline structures.

Quantum physics has demonstrated that simultaneous transfer of energy is possible. A particle can be in one place and in another at the same time and thought has an instantaneous effect over vast distances. So it seems feasible that crystal energy can travel from a crystal to the recipient.

It is my belief that what unifies and pervades the quantum and the crystal field is consciousness, which is present in and around everything in the universe. Although consciousness studies are increasing, research has not yet turned its attention to crystal consciousness.

Research has, however, been conducted into bioscalar waves. A bioscalar wave is a standing energy field created when two fields interact from different angles and counteract each other so that the field reverts to a ‘static state of potentiality’.

Research scientist and Professor Emeritus of Physiological Science at UCLA Dr Valerie V. Hunt says that bioscalar waves are ‘alive with checked and balanced energies that cancel each other out so that they cannot be measured or evaluated by the instruments in current use’. It is, she says, a ‘strong, huge, and yet passive [force]... Only its effects tell us that it exists in space and has power.’

Laser therapy specialist Kalon Prensky describes a scalar wave as ‘a non-linear, non-Hertzian, standing wave capable of supporting significant effects including carrying information and inducing higher levels of cellular energy, which greatly enhances the performance and effectiveness of the body and immune system.

Additionally it helps to clear cellular memory by shifting polarity, similar to erasing the memory of a cassette tape with a magnet.’ He states that ‘Scalar Waves travel faster than the speed of light and do not decay over time or distance.’ This sounds very much like crystal energy, and depictions of scalar waves look incredibly similar to the crystal energy perceived by a Kirlian camera or the intuitive eye.

Many of the newer crystals such as Anandalite, Que Sera, Quantum Quattro and Rainbow Mayanite contain concentrated bioscalar energy. All healing crystals probably have this energy within their matrix and generate it through their crystalline structure.

If, as subtle energy researcher Lilli Botchis asserts, ‘When the human body enters a scalar wave field, the electromagnetic field of the individual becomes excited [and] this catalyzes the mind/body complex to return to a more optimal state that is representative of its original, natural, electrical matrix form,’ we can see how a crystal with its optimal energy pattern might operate on the human – and planetary – energy body. 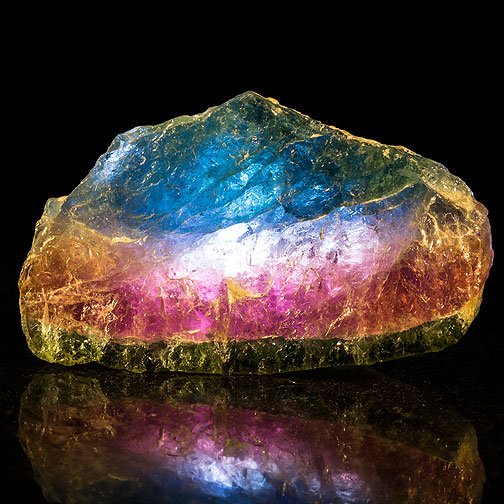 The Effect of Bioscalar Waves

Research suggests that bioscalar waves assist cell membranes in switching on the most beneficial genetic functions and switching off detrimental patterns encoded within DNA. It has been demonstrated that they directly influence tissue at the microscopic level, bringing about a healing balance.

They have been shown to enhance the immune and endocrine systems, stabilize chemical processes, improve the coherence of the biomagnetic field and accelerate healing at all levels. They also release stored emotions and ingrained thoughts from the cellular structures of the body, removing a root cause of psychosomatic dis-ease. Exactly what is claimed for crystal energy and crystal healing. 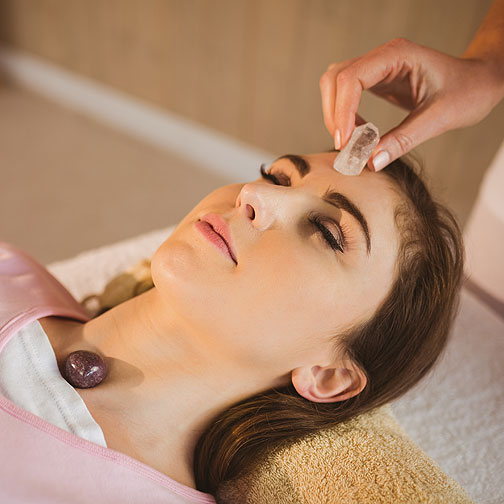 So it would appear that crystal healing works by bringing back into equilibrium all the separate elements of the body, utilizing universal energetic forces that are encoded into the crystals.

The information field of a crystal interacts with that of a human being or a particular environment, with each part influencing the other. This can work at a distance, powered by intention and consciousness.

In other words, as Professor John Wheeler puts it, ‘In some strange sense the quantum principle tells us that we are dealing with a participatory universe.’

An internationall known author, crystal expert, astrologer, psychic, healer, broadcaster and workshop leader, Judy Hall has a BEd in Religious Studies and a Masters Degree in Cultural Astronomy and Astrology, and has an extensive knowledge of worl Continue reading

A placebo makes you believe that something in your

3 Ways Conscious Writing Leads You to Express Your True Voice

“This elevator kind of looks like a hotel.” “Mmm-

The Climb to Success

Colorado has 53 fourteeners. What’s a fourteener?

Are You Getting the Message?

AS MUCH AS SHE HATED blind dates, Anne had taken c