How Does Mediumship Work?

How Does Mediumship Work?

A big part of the development I had to go through as a medium was getting to know my own mind, as I explain in detail in my book The Unbelievable Truth. As mediums, it is important that we know where our own thoughts end and spirit impressions begin, and in learning this we have to expand our consciousness to the limits and beyond.

For the first year or more of development we are taught to sit still and quiet our mind. It’s surprising just how active the thinking mind really is, especially when you’re asked not to react, not to question anything, just observe.

In the early days it was almost impossible for me, as I’d usually think about not thinking and then quietly scold myself for my lack of control, and before long a row would take place inside my head until I was mentally tired and would find myself drifting into a light sleep, only to jolt myself awake again and repeat the process from the beginning.

Usually at the end of these sessions I’d consider my thoughts and try to make sense out of them, especially the ones that had harassed my mind during the session, in the hope that they were coming from my deeper conscious self and had some significance, or were coming from the spirit world as a message for me or someone else in the development group.

It honestly took me a long time to realize that for the spirit world to get a message through to me I had stop trying and put myself into a state where I almost had no interest in it, in order to make space in my mind for information to come from a realm other than my immediate thoughts. 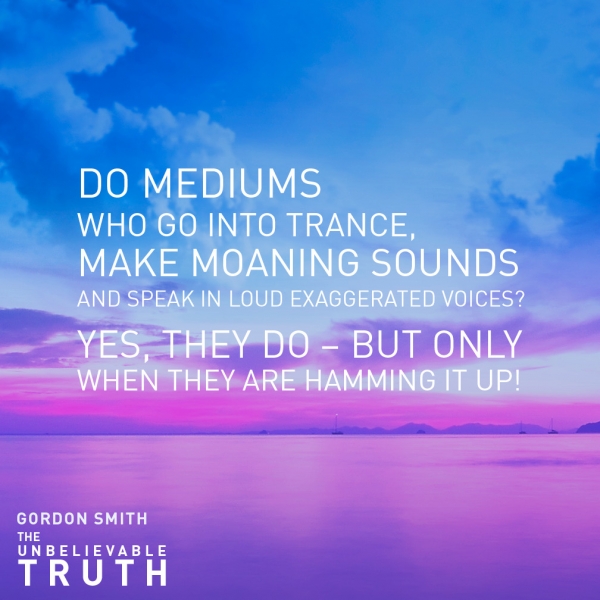 One of the things I truly try to get through to people who want to develop psychic or mediumistic gifts is that it will take a long time and that they will have to be dedicated and put in a lot of effort if they’re serious about progressing.

I believe that it took me a good two and a half years of practice before I was able to sit in silence and not try to think or get messages. Like most people at the start of development, I wanted to impress and speak about my experiences, but there came a point when it suddenly dawned on me that the less I did or wanted from this exercise, the more I understood my own mind. This continued until I was actually able to perceive thoughts building, and with that knowledge – and non-reaction – they would fade, leaving my mind clear.

You see, when a medium works properly there should be less of their personality in the message and more of the essence of the spirit. That way, ego doesn’t come into it.

Realizing this was a Eureka moment for me, and it helped me to understand that mediumship worked through my mind, rather than from it. To deliver information from the spirit world, my waking consciousness had to be displaced, put to one side if you like, but not so much that I’d fall asleep.

Like any discipline, you have to work at mediumship, and in the beginning it feels as though it’s going to be a very long slog, but if something’s worth doing then it’s worth the effort, and for me developing mediumship really was worth it.

The great medium Albert Best told me that he could never truly describe what he was feeling when he gave someone a message from the spirit world. He said one time that it felt as though he was compelled to speak and the words came out of his mouth but not via his thinking brain. This made perfect sense to me, because I experience much the same thing when I work. There are times when it feels as though I’m hearing the spirit message I’m relaying at the same time as the recipient, and often I’m as surprised as they are at the content.

Truths and Misconceptions about the Mind of a Medium

* A medium is able to see into the future. A true medium will know that it’s more important to understand what’s happening now rather than try to look into the future, and anyway, it’s seers who see the future. Mediums talk to the dead.

* The mind of a medium must always be very calm and quiet. Most mediums I know are quite scatty, myself included. I can meditate and make my mind calm, but only when I have to.

* Mediums must have very calm and peaceful lives because they aren’t afraid of dying. I believe that every true medium I know has come through very heavy stuff in their life. It’s dealing with difficulties in our own life that helps us to cope with other people’s.

* A medium’s mind must be so much more advanced than an ordinary mind. Other than being able to lift their mind to a level that the spirit world can work through, a medium’s mind is no more developed than a dog’s – and that’s not being fair to dogs.

* A medium’s mind might get taken over or possessed by an evil spirit. There are no evil spirits – my mind has been open since I was a child and nothing has ever tried to take it over, evil or otherwise. (What does that say about my mind?!)

Editors Note: Read more of Gordon's book The Unbelievable Truth in this extract: