How To Use Your Feminine Power For Unlimited Joy

How To Use Your Feminine Power For Unlimited Joy 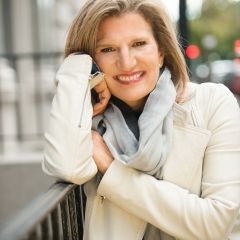 As I explain in my book, Pussy - A Reclamation, One of the greatest pieces of unconscious conditioning we have in our Western culture is that we do not teach our children the name of the source of our feminine power. Ask my students at the School of Womanly Arts what they were taught to call their genitals as a child, and you'll get a parade of colloquialisms: Wickie, Cuckoo, Privates, Down There, Pooter, Pee Wee, the Fine China, Name and Address, Venus, Noonie, Miss Kitty, Purse... the list goes on. Those who were taught a more direct word were often taught to call it "vagina," a clinical term that is also physiologically incorrect.

But what's worse, the majority of women were taught to call it nothing at all.

When we have no common language to describe that which is most essentially feminine about us, we have no way to locate and own our power as women. Our culture gives us no way to talk about the place where our power - and in fact, all of life - comes from. 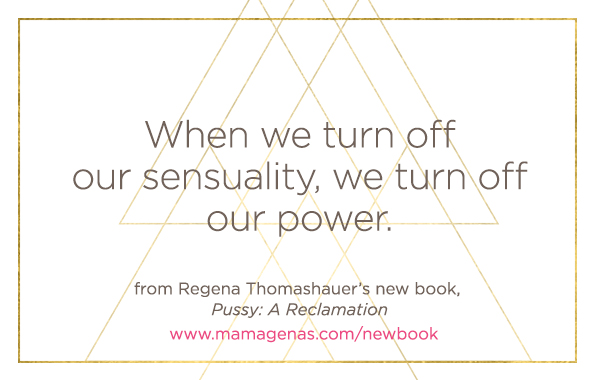 It's this very feminine power that is missing from all the success stories we hear.

I have been preoccupied with the question of why women have this limited ability to access their power and voice that nothing they do seems to ameliorate or resolve. As I look around the world of women, it seems as if our lights are off. We are turned off like a light switch. And it is no wonder. We have all been taught to turn off, to turn away. 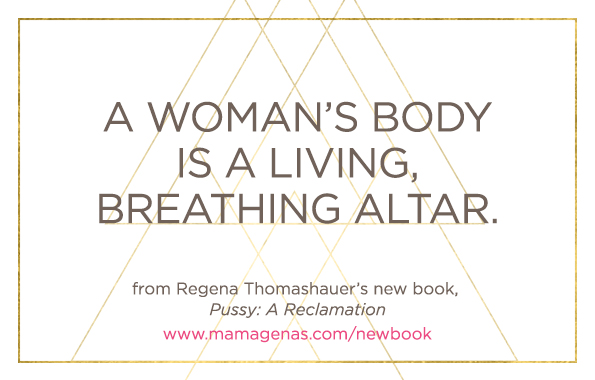 When we live in a world that cannot even comprehend its own inherent bigotry against women - and thus cannot step forward to honor or support the women and girls who have been devasted by it - what is the recourse? How do we stand up to an invisible assault that does not want to be made visible?

How does a woman weather - let alone triumph over - such a global denial of her experience?

How does she turn on when she has been systematically denied, passed over, and subjugated?

The Solution To Powerlessness Among Women

The solution for the epidemic of powerlessness among women, which neither great success nor higher education is able to solve is simple: reconnecting a woman to her pussy. Just as pussy is the source of all human life,

pussy is the source of each woman's connection to her own life force, her voice, and her sense of internal power.

When a woman turns on her pussy, she is actually turning on her life force and connecting to her divinity.

As the woman behind the School of Womanly Arts, a multi-million dollar women's educational institution based in New York City, I have made it my mission and my purpose to reclaim our power - to reclaim pussy, starting with the very word.

Where will your pussy lead you, once you toss her the keys and allow her to drive?

You connect to the raw joy and enthusiasm you had as a child. An enthusiastic and joyful part of you plugs back in. Your sensuality and eroticism ignite, shining a sacred light on your deepest longings and desires. Too long pushed aside, they come front and center - forming the road map to a life that's a living, breathing work of art. A loving tribute to your higher power.

Casting The Spell Of Rapture

I now know that all it takes to experience the Goddess - the meeting point between the human and the divine - is to cast a spell of rapture.

The sensation called rapture lives inside every woman. Rapture is the experience of divinity felt in the body. Your life force/spirit inhabits every cell of you. When you feel rapture, you get turned on - and become radiant as a result.

Rapture is about having certain feelings about yourself.  Here are a few of them.

There is beauty everywhere in you

No right, no wrong, no shame

You are so cute just now

The unbearable, magnificent, fleeting gift of this moment

Ecstasy for no reason

Feel this to get plugged into the Great Pussy in the Sky - what I like to call your GPS.

If only more women understood that we are not everything we've been indoctrinated to believe we are: Unimportant. Valueless. Clueless. Fat. Old. Losers. Incapable.

To learn more, see my book - Pussy - A Reclamation. 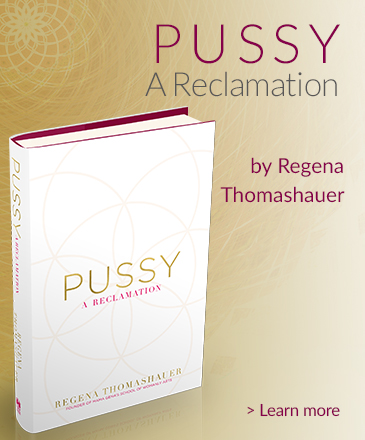 Regena Thomashauer (a.k.a. "Mama Gena") is a revolution: an icon, teacher, author, mother, and founder and CEO of the School of Womanly Arts, which began in her  living room in 1998 and has since grown into a global movement. She believe Continue reading