How Your Thoughts Create Your Reality

How Your Thoughts Create Your Reality

Discover The Potential Of Your Mind

Our brains continually sift through the possibilities and pick which bits of information to “see” and believe. Out of sheer laziness, the stuff we choose to perceive—and make no mistake . . . it is a choice—is stuff we already know. It’s stuff we decided on way back when. We see, feel, taste, touch, and smell not the real world, but a drastically condensed version of the world, a version that our brains literally concoct.

The rest zooms by without recognition. John Maunsell, a neuroscientist at Harvard University, says, “People imagine they’re seeing what’s really there, but they’re not.”

Once your brain decides which bits to let in, it builds bridges between various nerve cells, interlacing nerve fibers to create neural pathways. The average human has 100 billion nerve cells, each with innumerable extensions, so different highways get built in each brain. The map of neural pathways in your brain and, say, Johnny Depp’s brain are as different as the maps of Wisconsin and Rhode Island.

Once you get the pathways set up, you quit traveling the rest of the country. Interstate 70 in my home state of Kansas makes for a perfect metaphor. Believe it or not, Kansas—the state The Wizard of Oz portrayed in black and white—actually contains lots of geological landmarks.

There’s a miniature Grand Canyon in the northwest corner, for example, and a huge seven-story limestone formation called Castle Rock near the town of Quinter. But since people traveling through Kansas rarely leave I-70, nobody has a clue that these geological formations exist. They’ve literally bypassed all the beautiful, worthwhile stuff and come to the erroneous conclusion that Kansas is flat and boring. 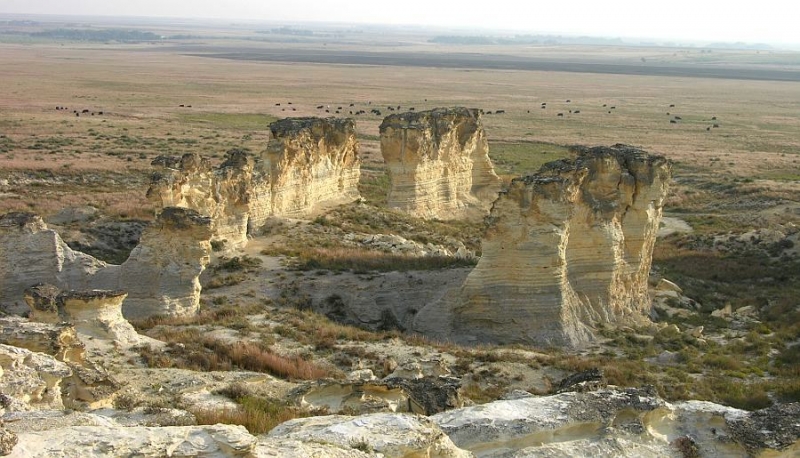 But it’s not reality.

Like those highway planners who put I-70 on the flattest, quickest, and easiest route, we build our neural pathways on the least complicated routes—the ones we’ve traveled so many times before. But this doesn’t show us reality. Not even close. We don’t begin to see all that is there—only three and a half minutes, compared to 821 years.

The roads and highways of our brains get set up pretty early. When we’re born, every possibility exists. Let’s take language, for example. Within every newborn is the ability to pronounce every sound in every single language. The potential is there for the r rolling of the Spanish language.

It’s also there for those guttural German diphthongs. But very early on, our brains lay down neural pathways that mesh with the sounds we hear every day, eliminating other sounds from other languages.

With the possible exception of Barbara Walters, pretty much everyone who speaks English can pronounce the following phrase: “Rolling Rock really rouses Roland Ratinsky.”

But when people from China try to learn English, they no longer have the neural pathways to properly say their r’s, so that’s why “fried rice” becomes “flied lice.” Just so no one  thinks I’m ethnocentric, I should probably add that I’ve tried pronouncing some of those guttural German words only to discover that my German neural pathways have been shot to hell and back.

Perhaps the best example of how your mind creates its own virtual-reality game is the everyday, garden-variety dream. When Morley Safer showed up on your doorstep last night asking all those embarrassing questions, it seemed pretty darn real. But once the alarm clock went off, Morley and that virtual 60 Minutes interview popped like the flimsy soap bubble it was.

Clinging To Our Warped Illusions

Our neural pathways establish reruns of what has gone on before. Like the three-year-old who insists on watching The Little Mermaid over and over and over again, we cling to our warped illusions with a tenacious grip. Get your bloody hands off my illusion! Even though it makes us miserable, we prefer to place our faith in the disaster we have made.

If you ask me, learning how to transform energy is so important it should be taught along with reading, writing, and arithmetic. It all starts with intent, the force that lies behind everything. It’s the energy, the fuel, the electric charge that sets up a resonant field and sends out probability waves into the FP (field of possibility). Esther Hicks, who facilitates the Abraham-Hicks material, calls it “launching a rocket of desire.” Giving it attention adds mass.

The minute you make an intention, you create it. It’s instantaneous. It exists as an actual thing. You don’t see it yet because you’re still operating from linear time. You’re still sold on the old-school adage “creating things takes time.” So you keep working and waiting. You keep following the seven steps from the latest self-help book.

What Physicists Say About the Quantum World

But here’s what physicists tell us. Things, in the quantum world, do not happen in steps. They happen immediately.

So the thing you intend, the minute you intend it, exists, but like Schrödinger’s cat, a famous thought experiment devised in 1935 by Austrian physicist Erwin Schrödinger, you’re only aware of the reality you choose to observe. The physical manifestation remains enfolded outside your current consciousness.

Cutting-edge physicists tell us life is multidimensional. But most of us are stuck in our one-dimensional physical reality, restricted to what we experience with our five senses. What we experience with these alleged foolproof tools of observation are nothing but what we decide to look for. It’s not even a chicken-or-egg question. What we see, experience, and feel with our five senses always comes after the decision to see, experience, and feel it.

I liken consciousness to a giant skyscraper. I may be living on the second floor, but the “thing” I created with my thought is up on the 17th floor. Until I can get to the 17th floor, it appears it’s still missing, that I’m still waiting.

Another great analogy is a television set. If you have cable, more than 100 channels are yours for the clicking. TiVo aside, you can only watch one channel at a time. When you’re watching, say, Modern Family, you’re chuckling at the antics of Cam, Mitchell, Phil, and Gloria and you’re completely unaware of the other 99 (or more) channels. That’s why it’s really important to stay on the channel you want.

Don’t give any airtime to the reality from which you’re trying to escape. Tune in only to your intent.