Prayers for Depression by Caroline Myss

Caroline Myss More by this author
Aug 13, 2014 at 09:00 AM
I spent part of my evening listening to the news reports about the suicide of Robin Williams, as I am sure many of you did. As with the death of Phillip Seymour Hoffman, we are left wondering how it is that yet another successful, famous individual could also be in so much pain that he would become addicted to drugs. The media gathered its experts to offer their opinions on why they thought Williams ended his life, but how would they know? They spoke on and on about depression and alcoholism, as apparently Williams openly discussed his struggles with both of these inner demons. Williams, as we all know, is yet another celebrity suicide—hardly the first. 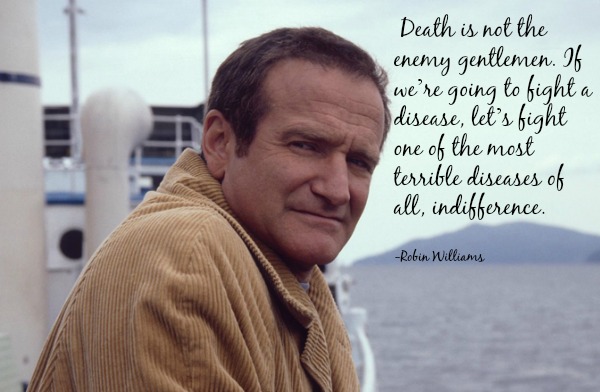 An Increase in Suicide Rates
Many people commit suicide these days. It's practically an epidemic within the military. And look at the number of young people who end their lives. It's astounding. Unlike the experts who credit depression as the root cause or being bullied at school, I find such explanations inadequate. It's obvious that these individuals are coping with depression, but who hasn't cycled through a depression in life? No one is happy or clear about their life or surrounded by love and safety all the time, though depression is certainly a suffering that extends well beyond the measure of whether a person is all the above. Depression is also a chemical suffering. A person often needs more than depression to consider ending his or her life—emphasis is on the word "often."

Depression -  The Leading Cause of Suicide
Depression is a leading cause of suicide—we know that. Depression is also complex and has degrees of intensity, though this is not the place for me to write extensively about this subject. Suffice to say that everyone familiar with depression—either because they are coping with it or because they are living with someone suffering with it—knows that it can grip you for a month or it can be a lifetime nightmare. My brother suffered with depression, mixed it with alcohol and ultimately died from both. I've lived with depression and addiction through the life of my brother and our family. I know depression is a suffering—I know it all too well. When clinical depression merges with a spiritual crisis, that's when the psyche loses its capacity to breath, to remain connected to the life force in any vital way. A crisis of the spirit—of the soul—shatters one's connection to purpose and meaning, to feeling hope itself.

Mind Suffering
We have grown increasingly complex over these past decades, focusing more and more on the world behind our eyes as much if not more than the world in front of our eyes. We have awakened intuitive, emotional, and numerous other senses, all of which have animated our psychic boundaries in ways previously unknown to human nature. Suffice to say that many of the sufferings of the mind are not just a product of one's personal life but of not realizing the full extent of one's own energetic nature.
I know nothing at all about Robin Williams other than seeing a few of his films and some of his stand up comic routines on television. But I gathered from those stand up routines that he was a man who paid attention to the events going on in this world. His satire took aim at political folly and global-sized problems, asking which was worse, the problems or the problem-solvers? In other words, Williams had his finger on the pulse of world events. He may well have had everything that money could buy, except solutions to these predicaments that plagued his soul. I am merely speculating, you understand, but he was not a shallow man. He was a thinker, a man whose art demanded he pay attention to what mattered to people. He was also by his own admission an addict and perhaps even bi-polar—who knows. But those diagnoses do not diminish his capacity to observe the world around him; indeed, as I have witnessed with many people who battle mental and emotional sufferings, some of their pain is rooted in their astute powers of observation and not just from their personal lives.

Prayers For Those Coping With Depression
All pain is not personal. A spiritual crisis can look like depression. It has many of the same inner sufferings, but the differences are very profound. Unfortunately we cannot ask a suicide victim any of the essential questions that would help one discern whether he is suffering from clinical depression or experiencing a spiritual crisis. Let me offer these prayers for all those who are coping with depression:
My prayer on this day is that I receive the graces of hope and fortitude during this time in my life. Help me to make it through those moments when I feel like giving up. Hover over me, God, with guidance through my thoughts and through my dreams.

Guide me through this darkness, Lord. Hover over me especially when I cannot seem to hold on for another moment. Flood me with the graces of hope and fortitude. Send your angels to watch over me as I sleep through the night. Remind me during the day that from this small dark cocoon, I will emerge a butterfly.
I would love to talk to you on my weekly radio show and give you some guidance and support if you are hurting right now. You can tune in to my radio show, Archetypes  every Wednesday from 12-1PM on HayHouseRadio.com.
Here is a video clip of Robin Williams discussing the subject of death and caring for each other from Patch Adams:

Caroline Myss has been in the field of energy medicine and human consciousness for 20 years. Since 1982, she has worked as a medical intuitive, providing individuals with an evaluation of the health of their energetic anatomy system. She specializes Continue reading

How to Stop Fear From Holding You Back

Do you remember those signs that would say 'Free C

This month, I’m excited to share a passage from my

The wisdom of Louise Hay and the power of affirmat

David Shaw tried to sit still in the reception are

Are You the Tortoise or the Hare?