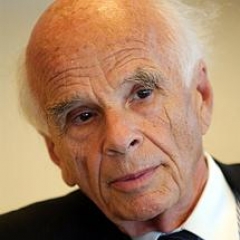 As a child, the walks I would take with my uncle Pippa were important parts of my life. His real name was Pista (pronounced “Pishta,” the diminutive of Stephan), but when I first started speaking, I pronounced it “Pippa.” He liked it so much that he insisted we all call him that. Uncle Pippa’s life passions were philosophy and music. Mother told me later that he would sit at his desk in the shoe factory and write philosophical treatises on Nietzsche and Freud. The factory was run entirely by Father.

Uncle Pippa and I would often walk in the Városliget, the park across from our house. We would take smaller, quieter paths and I would listen to him talk about the many joys of nature and the special wonder of having been born a human being. He said he could never understand how people could go through life without recognizing the miracle of existence and looking for their true mission in life.

When World War II broke out—I was seven at the time—Uncle Pippa would comment on the tragic mistakes made by individuals and entire societies when they attacked and wanted to kill or dominate each other, instead of learning to live in harmony. He could not understand, he told me, how a nation that had produced such writers and thinkers as Goethe, Nietzsche, Schiller, and Schopenhauer and musicians such as Bach, Beethoven, and Brahms could also produce a man such as Hitler, who was so full of hate that he could only sow destruction. But my uncle remarked that he wasn’t really surprised that there were people who would put that man on a pedestal and consider him their supreme leader.

Uncle Pippa was a pessimist when it came to human nature, but he was filled with a nearly religious fervor when it came to the “nature of nature”—the essence of the whole universe. There the rule was order and harmony, whereas in human society, we had disorder and discord. The great exception about humans was their ability to create art—especially poetry, literature, and music. In this realm, the human spirit could rise above petty conflict and bloody violence.

One of these walks started with a dramatic episode: I was almost killed! As we set out on our usual route, I remembered that I’d made a date with friends to play soccer that afternoon. As our “stadium” was on the opposite side of the park, I thought I would take my bike—I was happy to have an excuse to ride it anyway. I asked my uncle if it was okay for me to walk with the bike next to me, and he said yes. So I rushed back across the street to our shoe factory, where my precious silver-chromed bike was kept in a corner of Father’s office.

I got on the bike right by the door of the factory and rushed back across the road where Uncle Pippa was waiting. I was so happy to have a chance to show off my riding skills that I sped off and didn’t see the motorcyclist coming on the left. He, too, must have been in a hurry because he came at me with enormous speed. When at last I saw him—and he saw me—it was almost too late. He jammed on the brakes and both his wheels locked; he was sliding toward me sideways, with a tremendous screech of tires. I had a vision of a screaming devil hurtling at me, and had only a fraction of a second to decide whether to brake and let it pass in front of me or try to speed up and hope he would pass behind.

I chose to put on some speed. That was lucky. The sliding motorbike missed my rear tire by a hair. The rider regained control, and with a muffled shout, he disappeared down the street.

I was safe and sound, but shaken up. Above all, I was very ashamed. Here was Uncle Pippa seeing firsthand how I’d managed to almost kill myself on my bike. I was also worried that he would tell my father—which may have led to a quarantine for the bike in the depths of the shoe factory, at least for the foreseeable future. But Uncle Pippa didn’t tell on me, neither that day nor any day after.

During our walk, I was rather subdued, and Uncle was even more thoughtful than usual. He spoke about chance and destiny, and although I didn’t understand everything he said, I did realize that there is no such thing as pure chance. In other words, everything happens for a reason.

In my near collision, for example, the reason I didn’t get killed must have been that I needed to grow up in order to fulfill my life’s mission. A moment’s inattention couldn’t possibly cancel that out. But, my uncle remarked, “It is better not to tempt fate. Before crossing the street, just look both left and right.” I was happy to agree with that.

Uncle Pippa’s other passion was music. He was a dedicated violinist. With his friends, he formed a string quartet that met in his study at the same hour every week. I could hear the music in my room from the floor below, and as soon as I would hear it, I would run down and sit quietly in a corner. There I would enter the same wonderland that opened for me when I was playing the piano.

String quartets by Mozart, Schubert, and Brahms were their favorites; and hearing the “Pippa quartet” play them made a great impression on me. It was an impression just as lasting as my walks in the park, even if on those walks I would only comprehend a third of what Uncle Pippa was telling me.

But the veneration of the harmony that Uncle said was everywhere in the cosmos, a harmony that I could experience firsthand in playing the piano and listening to music, stayed with me throughout my life.

Ervin Laszlo, Ph.D., holder of the highest degree of the Sorbonne (the State Doctorate), is the recipient of four honorary Ph.D.’s and numerous awards and distinctions, including the 2001 Goi Peace Award (the Japanese Peace Prize) and the 2005 Mandi Continue reading