Living with the Mob

Living with the Mob

Godfather’s daughter has her say. 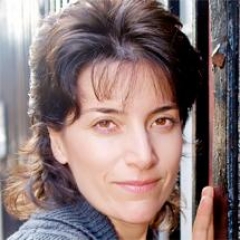 I was in my healing room at home in the middle of a session with my client Marina, who had come to me about her persistent back pain. The session started out like any other: I lit the room with candles and rubbed drops of essential oil of lavender between the palms of my hands. The vibration in the room was calm, and the air smelled warm and sweet.

This was Marina’s second visit, and I suspected that the nagging back injury she’d had since she was a teenager was connected to a trauma she’d experienced at that age—an upsetting event she’d been holding on to that we needed to get to the root of and expose. It was the only way for her to release the pain.

Marina lay down on her stomach on my table, and I shut my eyes and held my hands over her lower back. I could feel a swirl of energy surge from the top of my head down through my arms, shooting out like moonbeams from the tips of my fingers to Marina’s back. I soon began to see images of Marina in my mind. I saw a shadowy image of her as a child crouched beneath an old wooden table, playing alone.

“What happened under the wooden table, where you played as a child?” I asked her. I could feel my energy opening up to the universe and my hands getting hot.

“I’m not sure what you mean,” she said. “I never played under a wooden table.”

A new scene flashed before me: The same little girl was under the same table, and Italian music was warbling in the background—a woman with a beautiful voice was singing. Suddenly, the song was interrupted by the harsh voices of angry men stomping into the dining room. The men didn’t see the little girl in her spot under the table, but she was afraid anyway, so she scooted further into the shadows, trying to disappear. I could feel the girl’s growing panic.

“The Italian music, the angry men, when you were about five years old?”

“I don’t understand what you’re describing, Rita. I don’t remember any angry men. And we’re not Italian, so . . .”

And then it hit me like a tidal wave crashing through a bursting dam, knocking me down before swallowing me up. This wasn’t for her; it was for me.
Before I truly understood what was happening, I was jolted back in time and sitting under my grandmother’s table in the dining room on Sullivan Street.

From where I am sitting, I can only see the legs of the men, from their knees to their shoes. Their yells get louder and louder until they’re cut off by my father’s voice. Dad’s gravelly whisper is so low it’s hard to hear, but so powerful that nobody dares to speak over it.

He says only five words—hard and sharp, like rough, unfinished metal.
“Don’t ever f*ckin’ disrespect me.”

His sentence ends with a smacking thud, like the sound when my Gram tenderizes the veal chops with her silver hammer. Then a man I’d never seen before is on the floor facing me, looking into my eyes as blood gushes from his nose onto the floor, flowing toward me like a little red river across the black-and-white tiles.

Then I see a fist smashing into the man’s face. The ring on the fist’s pinky finger belongs to my father. I follow the ring with my eyes as it flies up out of sight above the table, and then flies down again into the man’s cheekbone. It pumps up and down, again and again, until the man’s face is ripped and shredded. Then my dad’s shiny shoe stomps on the man’s head three times before everything goes quiet.

The man’s body is pulled away, and a few minutes later I am alone in the dining room. I can hear Gram’s beautiful music warbling again from her radio. The little river of blood reaches my toes and pools around my feet. In that moment, I make a connection between the blood, my father, and me: If I don’t do as I’m told, Daddy’s going to hurt me, too. I want to scream, but instead I slap my hands over my mouth and whimper in silence until I hear my mother looking for me. I crawl out from under the table.

“Oh my God, Rita. Have you been sitting under there this whole time?”

She scoops me up into her arms and hugs me, trying to stop my body from shaking.

And that’s exactly what I did, for almost 40 years . . . as the Godfather’s daughter.

Rita Gigante has dedicated her adult life to healing people spiritually, emotionally, and physically. She has a degree in exercise physiology and is a licensed massage therapist and Reiki master. Continue reading