No Time to Cook?

No Time to Cook?

All you need are some Looneyspoons! 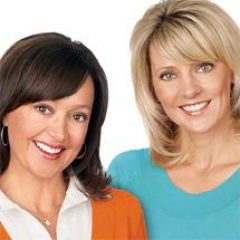 This year marks the 15th anniversary of the publication of our first cookbook, Looneyspoons: Low-Fat Food Made Fun!  The surprising success of our “little basement project,” as we fondly refer to it, has led to experiences beyond our wildest dreams, including appearances on dozens of popular TV shows, features in newspapers and magazines from coast to coast (including a two-page spread in People magazine with the Barbra Streisand-James Brolin wedding picture on the cover!), our own TV show on Food Network Canada and repeat visits to the huge U.S. shopping network, QVC, where we rubbed elbows with Paul Abdul, Paula Deen, Joan Rivers and Suzanne Somers.

But the best, most satisfying experience of all has been reading the thousands of heartfelt emails and letters that have poured in from “fans” across North America. (We put “fans” in quotations because we’re just ordinary people, not movie stars or famous athletes, so the concept of having “fans” feels very strange to us!) The letters describe how our cookbooks and recipes have impacted peoples’ lives, and their families’ lives, for the better. Sometimes we’d laugh and sometimes we’d cry when reading incredible weight-loss success stories, tales of finicky kids who were eating their vegetables for the first time, accounts of cooking-challenged husbands who were suddenly whipping up tasty masterpieces, and an unforgettable, hilarious letter from an 80-year-old gentleman who confessed that he’d never cooked a single meal from any of our cookbooks, but uses them for bathroom reading, “since that’s where all the fiber ends up anyway!”

Despite the overwhelmingly positive response to Looneyspoons and, later in 1999, to Crazy Plates, our second cookbook, we made the tough decision a few years ago to take both cookbooks out of print. Needless to say, the bookstores were NOT happy! “What!? Are ya nuts?” they said.  Yes, and we’ve been called worse. “Why would you stop selling a bestseller?” But the decision had nothing to do with sales potential or money. It bothered us that some of the nutrition information in our cookbooks was outdated and, in some cases, outright wrong (based on newer studies). For example, back then, fats were classified as “evil” and we were encouraged by experts to drastically cut back on fat consumption, yet they didn’t make a distinction between what are now known as “good fats” (avocados, nuts, seeds, salmon, etc.) and “bad fats” (hydrogenated and trans fats). We were advised to cut out ALL fats, which, of course, were replaced by carbs, mostly of the white, refined variety. (Sugar and flour—not a good thing!) In our defense, no one was talking about “good carbs” and “bad carbs,” either! So out went the fat and in came the carbs, and the ‘90s low-fat craze was born.

Ironically, the low-fat frenzy seemed to make people fatter! Yup, as a continent, we were puffing up along with the fat-free puffed rice cakes we were “hoovering” down. Everyone knew the rule: As long as the cookies were labeled “fat-free,” they could not (repeat, could not!) make you fat. Calories and sugar simply did not count. Remember those days? Funny thing was, as everyone seemed to be getting fatter from eating fat-free, we were getting loads of letters from readers who were LOSING weight, not gaining it. They were making our recipes, following our books’ nutrition advice and shopping for smaller jeans. Say what? How can this be? What revolutionary diet plan or sage words of nutritional wisdom were causing these folks to drop dress sizes and melt their middles like celebrities getting ready for the red carpet? What was it? Enquiring minds want to know!

Well, we’re pretty sure we’ve figured it out: Our cookbooks got people cooking! Yes, cooking! How ingenious! Our mission was (and still is) to make healthy cooking delicious, easy and fun. We gave folks recipes for scrumptious comfort foods that happened to be good for them, too. We made them laugh. That got people more interested in cooking. As they cooked more, they simply ate better. More veggies, more lean meats, more whole grains, more fresh, good stuff. That meant they relied less on packaged, processed, sugar-laden, fat-free concoctions. They lost weight. They felt better. It was sheer, accidental genius (if we do say so ourselves!).

Let’s fast-forward to today. Fewer and fewer people are cooking. It’s a sad fact (and not just because we’re cookbook authors!). With life’s fast pace, we’ve turned to convenience foods as our daily bread—not the whole-grain variety, either. Take-out, drive-thru, eat-in restaurant, vending machine, microwave…you name it. As long as it doesn’t involve cooking, “sign us up!” has been our motto. Heaven forbid we make the effort or take the time to prepare our own meals. Instead, it seems that everyone’s eating out of packages, boxes and bags (oh, my!). That means we’re eating more sugar, salt, bad fats, high-fructose corn syrup, MSG and artificial ingredients than ever before. We’ve forgotten what “real” food is. And that drives us crazy. Absolutely looney, in fact. Perhaps the obesity epidemic isn’t about people eating too much food. Maybe it’s about people eating too much that ISN’T food!