Success with a positive spin. 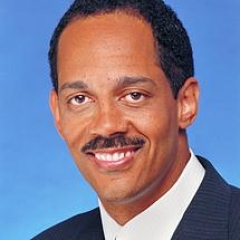 After Keith Harrell’s dream to play professional basketball didn’t work out, he turned his sights to a new career goal, and, with the help of a cousin/mentor, he pursued it with all the heart and determination he had shown on the court:

The assistant to the regional manager was impressed, and the entire interview was a very positive experience. When it was over, he complimented me on how prepared I was. He offered two or three pieces of advice that would strengthen my interviewing techniques, and then agreed to meet with me again in about a month for another trial run.

I became obsessed: I was going to be hired by IBM, and nothing was going to get in my way. I spent the next few weeks in constant study; as a result, the follow-up mock interview with the assistant to the regional manager went even better. In fact, it went so well that he made the following suggestion: “Keith, I think you’re ready, so I’d like to set you up for a courtesy interview.”

“Yes, but I emphasize courtesy because IBM is still not hiring. But we’re always looking for potential talent somewhere down the line. Are you interested?”

“Absolutely—you tell me when and where and I’ll be there.”

An appointment was set, and I was on fire. Anybody who’d sit still long enough would get to hear my presentation for the interview. My mom heard it so many times she could quote it back to me. I made my pitch to my sister and to all my friends. I lived, ate, and slept that IBM interview.

I also stepped everything up a couple of notches with my cousin Kenny. We went from Saturday-only sessions to Saturdays plus two or three nights a week, and I went to the local library and studied in addition to that—I was as prepared as I could be. My meeting would be with Mr. Coby Sillers, an IBM manager in the sales division known for his thorough and intense style. He was tough, but I was ready.

“You didn’t take any business courses in college, Keith,” he began.

I smiled, took a deep breath, and began. “Mr. Sillers, I spent four years in college, and I graduated on time. My major, community service, taught me how to deal with all kinds of people and how to build and manage relationships. These skills are especially important in today’s market, where a successful businessperson has to cultivate partnerships, work as a member of a team, and know what it takes to win. I was a starter on my basketball team all four years in college, which proves that I’m a hard worker. I was the team captain for three of those years, which further demonstrates my leadership abilities and shows that I know about preparation and competition, and I have the right attitude. My dad’s been teaching business for more than 20 years now at Seattle Community College, so I know the basics. I’m confident that I have what I need to do this job, and what I don’t know, I can learn. I assure you, I can handle anything IBM asks me to do.”

It appeared that the interview was going well. I was satisfied with my response, and I was delighted that I’d spent so much time in preparation for this session. Eventually, Coby Sillers got around to one of the questions that IBM considers crucial in all job interviews: “Keith, how would you sell me this pencil?” He pointed to one lying on his desk.

“Mr. Sillers, before I sell you anything, let me take the time to understand exactly what your needs are. I want to sell you what you need, not what I think you need. My purpose in being here is to form a relationship—a partnership. So let me ask you some questions so I can better understand your needs.”

Mr. Sillers liked my answer. We had another few meetings together, and then the process was considered complete. I had a good feeling. I’d prayed and I’d prepared—the rest of it was out of my hands.

I set my sights high, but the rest of my family had their doubts during the training process. My sister thought I was crazy; and to my amazement, my mom, who’d always supported me in everything, thought this was a far-fetched plan. She let me know in little ways, such as bringing home job applications for employers such as Boeing and the city of Seattle. Both offered great opportunities, but my focus was on IBM.

I honestly believed that IBM was the only company that could meet my needs. In my opinion, they were the best company in the world because they truly respected the individual and were all about performance, excellence, and striving to be the best with the customer. They so completely coincided with my sports philosophy that I was convinced it was Big Blue or nothing.

You can imagine how happy I was the day the phone rang.

“Is this Mr. Keith Harrell?”

During his 14 years at IBM, Keith Harrell was recognized as one of the company’s top sales and training instructors. As president of Harrell Performance Systems, he established a new career as a life coach and motivational speaker, sharing with others his success secret—an unflagging “attitude of gratitude.” At his death in October, 2010, Keith Harrell left a legacy of courage, service, and faith in the future.

Known across corporate America for his energetic, innovative presentations, Keith Harrell (Mr. Super-Fantastic) is a dynamic life coach and motivational speaker who specializes in changing behaviors through a positive attitude. Keith shares his power Continue reading

Climbing Your Own Everest?

If we’re honest with ourselves, every one of us ca

The Body Has Many Souls

The soul is the body. The body is the soul. The bo

A Courageous Recovery From A Spinal Cord Injury

When I opened my eyes, I couldn’t move. I couldn’t

Editor's Note: To mark the release of the expanded

Do You Live with a Water Child?

“We call her the mermaid,” Marisa’s father tells m