Laughter is good for the soul. 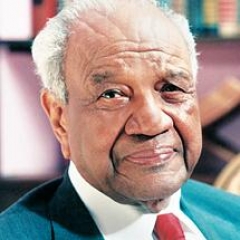 When I first went to New York to pastor in 1948, my best friend until his death was Rudolph Thomas, then head of the Harlem YMCA. There were very, very, very few hotels, which admitted people of color in 1948. There were very few in New York; hardly any. It was said that if you sat in the lobby of the Harlem 135th Street YMCA, sooner or later you would see every black man of prominence pass through the lobby, for there was no other place to stay. Rudolph was head of all of that, and had risen from elevator boy. He knew New York as very few people did, an intimate of its political, social, religious life. I benefited from that. One of the most charming things he used to tell was of his growing up in Orlando, Florida.

His mother, as was the custom back there, baked fruitcake for Christmas in October, drenched, or sprinkled, with the appropriate liquid—whiskey; putting this under the bed so the whiskey might permeate the fruitcake, which gave it a peculiar and attractive bite. Once, a ball he was playing with on the floor rolled under the bed. He went under the bed to get his ball. He found the fruitcake while looking for the lost ball. So he pinched off the least bit of the fruitcake and found he liked the flavor. The next day in school, he said that by two o’clock in the afternoon, he could hardly think of anything except that cake, and so he would pinch off another little bit of the cake. Each afternoon that happened, day after day after day. Finally, close to December 25 came, Christmas Day, and his mother reached under the bed to get her cake and found these huge gouges out of the cake. There was not very much cake left. She said to him—she always called him Rudy—she said, “Rudolph, come here.” Rudy said to himself, “Oh, Lord, Judgment Day has come.”

When I went to New Orleans to pastor in 1941, or whatever it was I was trying to do, one of the oldest and most honorable pastors in New Orleans was named J. A. Burrell, pastor of Progressive Baptist Church, and there was a picture of him inside the church. There was a clock in what we called the vestibule, but now the Narthex. Some people wanted to honor him, so they took the clock down in the vestibule, the Narthex, and put his likeness up instead. Somebody came to church the next Sunday who apparently was not as enthusiastic about the pastor’s long service, and looking at his picture in place of the clock which had been there, said, “Oh, Lord, they took down time and put up eternity.”

I am a native of Louisiana. There were many secret orders around the bayous and the Mississippi River towns. Given the peculiar jumble of languages that became a part of our history—French, English, Spanish, African—our pronunciation of words sometimes strayed strangely from their original sound. The treasurer of one of those secret orders, the Knights and Ladies of Honor of America, was giving a report of expenditures. He cited $3 for water, $2 for the sign painter, $11 for miscellany, $7 for the janitor, $8 for the chauffeur, and $13 for miscellany. Finally, one elderly member of the organization rose and asked the question, “Who is this Miss Laney who is getting all of our money?”

A pastor whom I knew long ago was elected pastor of one of our Baptist churches. He was of modest credentials, achievements and gifts, and the church was a significant one for that community. Some of his friends said to him, “How are you going to grow into a stature that will enable you to pastor that church?” “Oh,” he said, “That’s no problem. If they will give me six months or a year, everything will be all right. I will cut it down to my size.”

My colleague in Brooklyn, Sandy Ray, used to tell of a time when they had started having interracial ministerial meetings in Columbus, Ohio. One preacher, who was white, said that he prepared his sermon but that it never seemed to reach home, never seemed to be of any great importance to people. People did not come to church, as he thought they ought. One of the black preachers stood up and asked him, “When do you prepare your sermons?” “Oh,” said the white preacher, “I start on Monday and I work Tuesday, Wednesday, and Thursday, and by Friday I hope to have it finished.” “Ah,” said the black preacher, “There is your trouble. What you are doing, you are preparing and the devil is finding out what you are preparing and he is keeping your sermon to a low value. You see, I have a great number of people because when I preach, the devil does not know what I’m going to say. As a matter of fact, I don’t know what I’m going to say.”

A preacher preached fervently upon the joys of heaven and our desire to go there. After the service, he asked the congregation, “All of you who want to go to heaven, would you stand up?” One man did not stand up. The preacher said, “Son, don’t you want to go to heaven?” “Yes sir,” he answered the man. “But you sounded like you wanted to carry a bus load out tonight, and I don’t want to go then.”

Dr. Gardner C. Taylor, born in 1918, is a graduate of Leland College and the Oberlin Graduate School of Theology. Named “Dean of African American Preachers” by Time magazine, he served the Concord Baptist Church of Brooklyn as its senior pasto Continue reading