Learning Mindfulness From An Enlightened Kitty

Editor's Note - the following is an excerpt from David Michie's novel, The Dalai Lama's Cat And The Power of Meow.

Something happens to cats after we have enjoyed a delicious meal. Call it a feline sugar hit. A rush of good feeling. Abandoning our usually sedentary nature, we transform into crazed beasts who thunder down corridors, spring from one piece of furniture to another, or pounce from behind half-closed doors to attack the shoelaces of unsuspecting passersby. It is as though we are temporarily possessed. 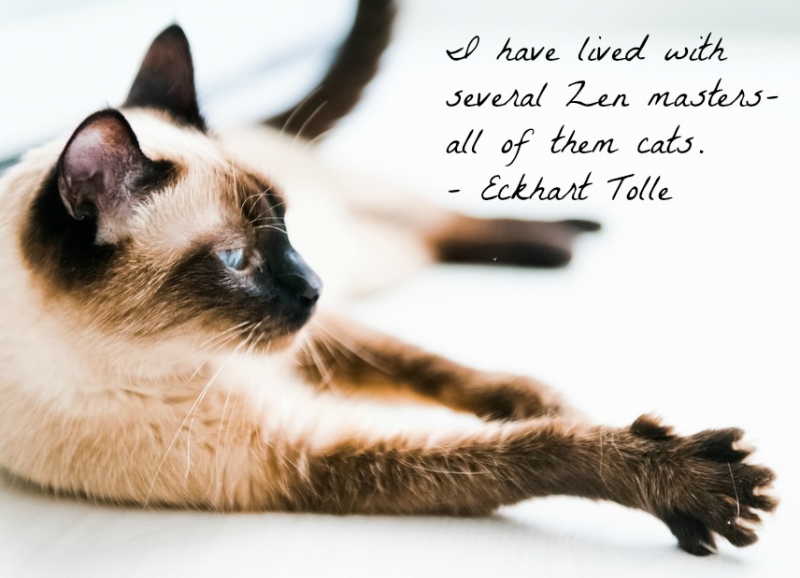 That, at least, is my excuse, dear reader—and the only explanation I can offer for my entirely unplanned global TV debut.

To be fair, I had no way of knowing that His Holiness was receiving visitors that particular afternoon. Nor that he was being interviewed, let alone by one of America’s most famous media moguls.
All I knew was that, a few minutes after gorging myself on a favorite treat of diced chicken liver, I felt that sudden, primal explosion of energy. Having made my way back to the suite of rooms I shared with the Dalai Lama, I was driven by an overpowering compulsion to do something completely mad. To run amok like the rabid jungle cat which, at that particular moment, I felt I was.

Bursting through the door of the room in which His Holiness received visitors, I tore up the carpet as I raced toward the sofa opposite where he was sitting. I ripped into its fabric as I scrambled up its side, a savage creature clawing its way up a perilous cliff. Then with a final, frenzied burst, I launched myself off one arm of the sofa, leaping toward the other.

It was only at this point that I realized the sofa was occupied by a beautiful blonde-haired woman. She was halfway through a sentence and my unscheduled, airborne appearance caught His Holiness’s guest completely by surprise.
You know how, when something truly unexpected happens, time can seem to slow down? Well, that’s how it was. As I flew past the woman’s face, her expression turned from one of calm engagement to total surprise.
As she pushed back in her seat to avoid me, the shock etched on her features could not have been more stark.

But she was no more shaken, dear reader, than me. I hadn’t been expecting anyone on the sofa, let alone a TV celebrity, nor one who was mid-interview. As I headed toward the opposite end of the sofa, for the first time I observed the lighting. The cameras. The crew watching the action from the shadows. By the time I landed, all the demonic energy that had propelled me from the other end of the sofa was gone.
I was, no longer, a Snow Lion possessed.

Cats And Living In The Moment

She looked at me. I looked at her. Both of us were taking in what had just happened. It was only then that I remembered conversations in the executive assistants’ office during recent weeks about her expected visit. As a feline of considerable experience in diplomatic circles, I am not one to name-drop about the Dalai Lama’s visitors. Let me just say that the woman concerned was an American of Greek descent. One who founded an online media outlet that went on to become one of the fastest growing in the world. An author herself, one of her most recent books concerns what it means to thrive. There, that’s as many hints as I’m willing to disclose.
As the woman and I regarded each other closely, from across the coffee table there came a gentle chuckle. 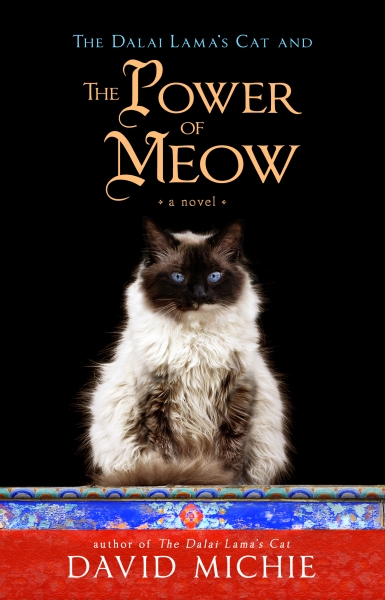 “She likes to do this, sometimes,” said His Holiness. “Especially if I spend too much time at my desk.”
“This is HHC?” asked the Dalai Lama’s guest, her voice sonorous and merry. To give credit where it is due, she seemed to have landed on her feet just as quickly as I had.
His Holiness was nodding.
“Well,” she glanced over at where I sat, blue-eyed and looking so innocent that you would not even believe a clot of cream would melt in my pink mouth. “I didn’t think I’d be welcoming two celebrities to the show.”
“You like cats?” the Dalai Lama asked, gesturing in my direction.
“Oh yes!” There was genuine warmth in her accented voice. “I believe that pets can teach us in many ways. Just like you say, they can be wonderful reminders to us to get out of our heads and live in the moment.”
His Holiness was nodding with enthusiasm. “Yes, yes. They can bring us back to here and now. Not be caught up in too much thinking.”

“Which brings us back to mindfulness,” she continued in a seamless segue back to what had evidently been the subject of their interview. “We hear so much about mindfulness these days. But is it the same as meditation, or is there a difference?”
The Dalai Lama was nodding. “This is a very good question,” he said. “There is much confusion. You see, when we practice mindfulness we are present to this moment, here and now, on purpose and without judgment. We pay attention to what is coming through our sense doors. What we hear,” he pointed toward his ears. “What we taste. And so on.”

The Secret Of Happiness

His Holiness paused, a sparkle appearing in his eyes. “There is a famous story about a novice monk who asks an enlightened master, ‘Tell me, what is the secret of happiness?’ The master tells him, ‘I eat and I walk and I sleep.’” His Holiness chuckled. “This makes the novice confused. He has to confess, ‘I also eat and walk and sleep.’ So the master has to spell it out for him. ‘Yes, and when I eat, I eat. When I walk, I walk. And when I sleep, I sleep.’ Mindfulness is when we focus on the present moment, instead of being caught up in our thoughts.”

She nodded, smiling warmly. “I came across a recent survey showing that there is a direct correlation between happiness and paying attention to what we are doing. Being in direct mode instead of narrative mode.”
“Exactly!” The Dalai Lama sat forward in his seat. “When we meditate, we choose to focus on just one object of meditation for a period of time. For example, we may focus on the breath. Or a mantra. For ten minutes, one hour,” he shrugged. “Whatever period is useful. When we concentrate like this, it supports our practice of mindfulness all the time.”

When We Are Mindful We Have More Peace

“So you might say that meditation helps us become more mindful in the same way that an exercise program helps keep us more physically fit?” confirmed the interviewer.
His Holiness was nodding. “Yes. Very good. When we are mindful we have more peace, more happiness. Greater freedom.”
The Dalai Lama went on to explain how even very busy people could create more space and contentment in their lives by mindfully drinking a cup of coffee or mindfully enjoying a shower, instead of being caught up in mental agitation. How even chores such as walking to work from the train station or ironing clothes could become opportunities to practice mindfulness.
Putting their advice to immediate action, I mindfully licked my left paw before giving both my ears a good wash. Grooming dispensed with, I walked over to the interviewer, raised my right paw, and gently prodded her thigh. This is one of the ways that we cats test unfamiliar humans to find out whether or not they are willing to receive that most feline of blessings—an occupied lap.

You can read the first chapter of The Dalai Lama's Cat and The Power of Meow below:

David Michie is the bestselling author of Buddhism for Busy People, Hurry Up and Meditate and Enlightenment to Go. All have been published internationally and are being translated into many languages. He has also written four thrillers, Continue reading