The lives our mothers leave us. 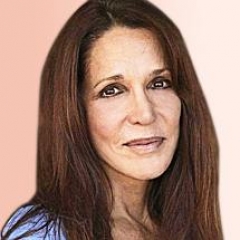 Emma raised her two children—Whoopi and her brother, Clyde, who is six years older—in Manhattan. She was a single parent who never discussed the whys and hows of that. When Whoopi was growing up, Emma was a Head Start teacher and a nurse, and while pursuing higher education, she rode her bike to college.

“My mother really is the finest woman I know. She’s curious about the world; she’s very funny. She had a cousin with whom she had a tight relationship, and when they’d get together, they’d do voices—they’d talk in these dialects to each other, which is where I get it from. I can still hear those routines in my head.”

It was pretty clear early on that Whoopi would go into the performing arts, and she wasn’t going to get any pressure from her mother to do something different. There were no admonitions about getting a law degree to fall back on, or learning a business. Emma never tried to discourage Whoopi from her creative pursuits. Her only warning was,” You have to be really good at what you do. You can’t be half-assed.”

One of the most important things Emma imparted to her children was empathy for other people. In their family life it was often emphasized, and it’s something that Whoopi knows has guided her in her own life. She tells the following story as an example:

“When I was a kid, we went on a school outing, and my mother also went along. I was not a popular kid—there were sometimes a lot of tears for me because I didn’t understand why I wasn’t like everyone else. I wasn’t hip; I wasn’t cool. But every now and then the hip, cool people would look at me and befriend me; and on the day of the school trip, they did, and I was hanging with them. I had a friend who was like me, who also wasn’t cool, named Robert; and under normal circumstances, Robert and I would have hung out and laughed and kept each other company on the outing. This time, because I was in with the cool kids, I didn’t do that.”

Not only did Whoopi not hang out with her friend, she participated when the cool, hip kids started teasing Robert.

“At the end of the outing, I said to my mom, ‘Wasn’t that great? I had so much fun—I loved it.

“And she went, ‘Oh, good.’ I could tell something was up by the way she was responding. Then she said, ‘Do you think Robert had a good time today?’

“I asked her what she meant, and she said again, ‘Do you think Robert had a good time today?’ I knew instantly what she was saying, and I really didn’t have an answer for her.

“She told me, ‘You know what that’s like, you’ve felt that, and you forgot. You just forgot. Try not to forget again.’ And I try not to. That’s how she taught me ethics. She’s an incredibly ethical woman; and that, I think, I get from her.”

The one time Whoopi took a large detour around the ethics lesson and lied to her mother is an experience etched indelibly in her memory.

“I loved the ballet, and in New York when I was a kid, you could go see the ballet for not a lot of money. In winter at Christmastime they put on The Nutcracker Suite, and I was offered the opportunity to go. My mother said, Okay, but you have to clean your room before you go.

“She was going out, and I said I would. But as soon as she left, the Bad Whoopi showed up and said, Oh, she won’t be home for hours—just go. And the Good Whoopi was going, Don’t do it; don’t do it. Just clean your room—it’s really simple…you’ve got the time. But the Good Whoopi lost, and the Bad Whoopi got the keys and the little bit of cash I’d stashed so I could get on the bus. I left and I enjoyed my time at The Nutcracker Suite.

“When I got home, I felt for my keys and I felt again…and I had no keys. I’d gotten into the building, but I couldn’t get into the apartment. And I started coming up with the most ridiculous ways to take care of it, like kids do. Can I climb out the window in the hallway and walk along the ledge? But I just had to wait until my mom came home—I had to stand in the hallway and wait. Then I saw her coming down the street, and it was like she could see me, even though I knew she couldn’t.

“So the elevator comes up, and she says hi. I say hi. And as I’m speaking to her, I’m trying to get around her, and she has suddenly grown 16 feet wide. I cannot get around her; I cannot get over her—I have to now follow her in, which was not what I wanted to do because I thought that if I could somehow get in there first, I could use my supersonic speed and clean my room before she got to the back of the apartment.

“She asks me how The Nutcracker was, and I tell her it was beautiful; it was lovely. Then she asks if I cleaned my room, and I swear to you, I meant to say no. I wanted to do the noble thing. But I didn’t—I just lied. That was the first and last time my mother wailed on me. Because it wasn’t only that I’d lied, it was that it was a stupid lie. It was that I didn’t think enough of her to at least be amusing.”

Whoopi says she wouldn’t be the person she is today if not for her mother. “For me, she taught me right from wrong and then expected me to remember it. With all the people I’ve met in my life and all that I’ve been exposed to, I wouldn’t trade my mother for a million bucks. Not for a day or a minute.”

Patti Davis is the author of seven books, including Bondage, The Long Goodbye, and Two Cats and the Woman They Own. She is the daughter of Ronald and Nancy Reagan. Continue reading

A Little Known Way To Improve Your Relationship

You had the good vibes going. You were high from t

Like many a model, I get asked all day long the mi

5 Spiritual Masters You Need To Know About

The Keepers of the Light are a powerful congregati

In many cultures, water is a symbol of fertility a

The 7 Best Supplements For Anti-Aging

In addition to taking vitamin D, fish oil, and  pr

We don’t typically think of condiments as anything

Too Important to Fail

It was one of those unexpected moments of deep rev