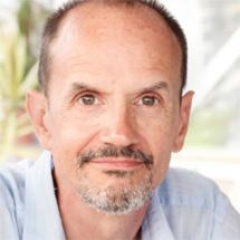 Matt Thomson has lost everything: his wife, his children, his job, all his money, and his front door key.  He decides his only option is to end it all one cold December night. But a last minute encounter on a bridge turns him back toward life and an adventure that will rock his world. Here’s the opening scene from Arjuna Ardagh’s new novel The Last Laugh:

They say when a body hits water from a great height, it’s like hitting concrete.

I looked down into the freezing Pacific.

Only if the impact is purely perpendicular, is there any chance to survive. Then comes the swim, and the coldness. The swim to what? To another dead end.

I stood on the bridge just before midnight, the wind from the ocean arriving in violent blasts. The occasional passing car sent an additional small wash of air, adding an additional vote for my extinction.

This was the last of a string of attempted departures, most orchestrated in my tired mind. Hours spent in Long’s Drugs looking at little bottles and wondering what dosages were lethal. Painful walks on the train tracks by the park, punctuated by the carefree laughter of children on the swings. Children. Always a bitter reminder of all that had been lost and destroyed by my foolishness.

The descent had been gradual. I had vague memories, like images out of focus, of a time of optimism. The wedding. That was a time of lingering dinners, of best wishes, of shiny new kitchen gadgets that would whisk up a lifetime of security. Their built-in obsolescence was brightly overlooked. Her eyes were so adoring then, everyone was a friend; everyone wanted to be close. The world was made of good smells.

We had built the perfect life. I had my own radio show on KYQD, “Beyond Belief.” It was an eclectic forum for anything beyond the ordinary. Over the years, I talked to John Bradshaw, Ram Dass, even the Dalai Lama once. We had environmentalists on the show, authors, new-age gurus, you name it.

We lived on the east side of town, Rebecca, me, and the kids. We had the best of everything, a beautiful house, two cars, an apparently idyllic marriage, and good friends. Becca was a graphic artist and had a few clients without having to worry. We had a good life, not extravagant but very comfortable. We preferred camping over hotels, barbecues at home over eating out.

“Once I led the life of a rich man . . .” Clapton’s voice came out of the darkness from a passing car radio, and was gone. The glare of headlights from a truck, another harsh lunge at one already stumbling. Give me time, give me time. I looked away from the glare, the rust on the metal bridge tower. Another wave of nausea.

Back to the endless tightrope between this hell and another. Papers were blowing randomly on the quay nearby. My thoughts flew out of control. Sarah’s birth, four years ago, the whole world was full of blessing then. Such promise, a new daughter, my career going so well. Dom’s first day at school. He cried when I left, and I hid for an hour in the bushes outside to be sure he was all right.

Another demon lunged, appearing from who knows where to join in the endless chaos of mania and indecision. Dominic’s voice on the phone last week, “I love you, Daddy. When can I see you, Daddy?” Words which only months ago had brought such riches, now drove the knife deeper into the wound beneath the ribs. There was no way to explain to him my confusion, my mumblings, it just added to his conviction that it was he who had done something terribly wrong. Each time my children’s voices came into the discordant medley, the water below became more horrifying. Without them, the jump could be so perfect, final, free of consequence.

Harmer. Dave Harmer. The only man I knew I could kill with my bare hands, and enjoy it completely. On the show, he was so cocky, talking about his new invention, the SolarBike. Tiny cells between the spokes and on the frame picked up the sun’s rays, stored them in a patented lightweight battery inside the frame, which could then propel the bike up hills. Like a moped, but so light you could put it on top of your car. He talked about the environmental benefits, how many more people would ride a bike if the hard work was taken out of it.

Afterward, over drinks, he told me how Costco and Pepsi were both endorsing the bike in national sweepstakes, that the military had a stake in it, that he had offers from all over the world. And . . . he was short $125,000 to complete his last essential safety tests before the bike was ready for national marketing.

I kicked the railing of the bridge. Bastard. How could I have been such a fool?

There were reasons he was not at liberty to reveal, why he had to borrow the money from a very special, very lucky private party. People were fighting for the chance to be that special one, but he had turned them all down for “karmic reasons.” He kept in touch, calling me from hotel rooms all over the world with stories of great potential success. He never asked me directly for the loan, just told me that he would make the right person a very special offer: lend him the money for six months, and he would then return it with 100 percent interest.

We had good equity in our house, and I had great credit. A mixture of greed and environmental exuberance led me to do something I later came to bitterly regret. I took out a second mortgage on the house, effectively leaving no equity in it at all, and took out a line of credit at the bank. I lent him the money. Sure, I had an iron-clad contract, I even had my attorney check it. Everything seemed above board and reliable.

I felt a stare, like a grip on the back of my neck. I glanced over my shoulder. An old man was standing by the next tower. Probably homeless. Whichever way I angled myself away from him, I could still feel the intrusion of his look. I wanted to be left alone. Even in this despair there was no peace.

A police car drove slowly over the bridge, slowing almost to a stop as it came close to me. Time was running out. Time to jump and be done forever, or walk away. Another flash of Dominic and then of Sarah, sweeping out of the darkness at me. What had these innocents done to deserve a father’s suicide?

The old man was still staring, as though challenging me to make a clean decision. Jump or move. The police car was coming closer. I started to walk to the other side of the bridge, as if pushing my body through treacle. I glanced at the police car, and averted my eyes as I passed the hobo, his look still piercing.

I walked into the pre-Christmas bustle of the city at night.

Arjuna Ardagh is an awakening coach, writer, and public speaker who has trained more than 1,200 people to become facilitators of awakening. He is the author of seven books, including the #1 national bestseller The Translucent Revolution. Website: Continue reading