The Meaning And History Of Mala Beads

The Meaning And History Of Mala Beads

Add Malas To Your Meditation Practice

Do you have trouble meditating? Would your mind rather work on your to-do list than plunge deeper into consciousness? Do old rock ‘n’ roll songs in your head drown out your mantra? Is it hard for you to sit still, even for twenty minutes?

The ancient seers of India understood these types of problems, and thousands of years ago (around the 8th century B.C.E.) they began to use beads to help them during meditation. The use of these prayer beads, called japa malas, spread to other cultures and religions besides Hinduism and Buddhism. More than two-thirds of the world use prayer beads, rosary beads, or worry beads today, to aid in their spiritual practices. We could certainly stand some help in this department too! 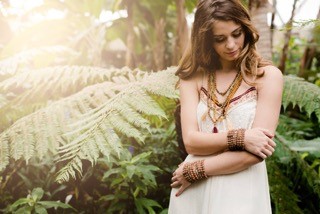 I know that when I was growing up as a devout Catholic, my rosary beads stayed by my side as I prayed to Mother Mary, one of the more recent incarnations of the Divine Feminine. And as a young adult, when I was initiated as a meditation teacher, the guru gave me a japa mala that he had blessed. So I’ve always had a strong connection to prayer beads.

In Sanskrit, mala means garland. Just like the lei, the garland of flowers that is placed around the neck of a visitor to Hawaii as a token of affection, 108 mala beads make up a garland that reminds you of your spiritual essence. Japa means repetition. Here’s a cool little fact: When the Roman Empire was trading with India, they mistook the word japa for jap, the Latin word for “rose.” So when these prayer beads came to be used in Rome, they were called rosarium, or rosary in English.

What Can You Do With A Mala?

For many spiritual aspirants, simply wearing a mala around your neck or having them nearby on an altar or table when you meditate will help keep you connected to a meditative state. That means less fidgeting and fewer mind distractions—always a good thing! Wearing it will also keep you more connected to your inner Guides. You can even wear your mala when you go out to surround yourself with an aura of protection. Hang a mala—in your car, on your computer, or over the kitchen sink—anywhere you need a reminder that you are a spiritual person.
Some, like the Tibetan Buddhists, use malas to help them keep track of the thousands or hundreds of thousands of times they must repeat their mantra. Now, with the meditation I teach, that isn’t necessary since I give you just one sacred seed sound that is specifically chosen for you.
Incidentally, I don’t want you holding anything in your hands while you are meditating as it’s critical that the higher level energies be able to access special chakras in your hands and fingers during meditation. More on that in an article coming here soon!

Going back to the ancient Vedic culture, their mathematicians knew that 108 was the number of existence. In the yogic tradition, there are 108 Upanishads (the sacred texts), 108 sacred sites throughout India, and 108 marma points, which are the sacred sites of the body. There were 108 gopis dancing with Krishna in Vrindavan. This number is so engrained in the Indian consciousness that 108 is the telephone number for emergencies, like 911 in the U.S. In the Jewish tradition, 108 is a multiple of 18, which is the number connected to the Hebrew word chai, meaning “life, or alive.” And in Islam, the number 108 refers to God.

Additionally, there are 108 lines of energy that converge to form the heart chakra, with one of those lines leading to the crown chakra and self-realization. And on a larger scale, the Sun’s diameter is 108 times that of the diameter of the Earth, while the Sun to Earth distance is 108 times the Sun’s diameter. So everywhere you turn, there’s 108!

What Beads Are Used For Malas?

Different types of beads are used to heighten certain qualities of your character. Some of my favorites include rudraksha beads, which increase clarity and calm down the central nervous system, helping to keep the mind quiet and free of any negativity.
If are interested to learn how to use mala beads, click here for more info https://deborahking.com/how-to-use-mala-beads/. I hope you’ll join me in experiencing the mala bead’s beauty and the benefits they can bring to your meditation practice and to your life!

Proof That Love Goes On After Death

In her new book, Love Never Dies: How to Reconnect

10 Ways To Unwind And Heal Your Adrendals

“I don’t know what’s wrong with me,” Tanya confess

Have you ever felt called to help others? Do you f