Three Easy Changes To Make Your Home Slim By Design

Three Easy Changes To Make Your Home Slim By Design 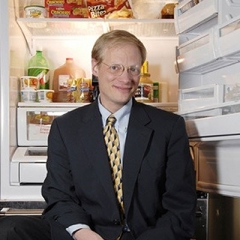 It’s easier to move your candy dish across the room than to resist it when it’s on your desk. It’s easier to use a small plate than to constantly remind yourself not to over-serve onto a big one.

For most of us, the solution to mindless eating is not mindful eating – our lives are just too crazy and our willpower’s too wimpy. Instead, the solution is to adapt the places around us so we mindlessly eat less instead of more.

It’s easier to use a small plate, face away from the buffet, and Frisbee-spin the breadbasket across the table than to resist it. Willpower is hard and has to last a lifetime. Rearranging your life to be slim ‘by design’ is easy. If we want to automatically eat better at home, we don’t have to change our minds; all we have to do is make a few changes to our home and how we behave there.

What does a slim person’s kitchen look like? If we knew that, we could set up our own kitchens in a similar way. While it’s no guarantee we’d lose weight overnight, at least it might tilt the scales in the right direction.

To figure this out we visited 230 homes, weighed the inhabitants and took pictures of all the food that was out on the counters. Nothing went unsnapped. We then spent eight months coding these kitchens to see what slim people do that might make them slim ‘by design’.

First we wondered if big kitchens turn us into big people. Tons of people think so, but it’s not the way it is in the real world. Part of this has to do with money. Richer people have bigger kitchens, and they also have personal trainers, designer workout clothes, sparkly exercise equipment and the leisure time to use them. If bigger kitchens make you eat more, bigger budgets can help you work it off.

Big kitchens aren’t the problem. It’s what’s in the kitchen.

The average woman who kept potato chips on the counter weighed eight pounds more than her neighbour who didn’t. That makes perfect sense. Chips are the good-tasting bad boy of nutrition – they’re irresistibly tempting, you can’t eat just one and they make you fat. Potatoes aren’t anywhere near the most dangerous counter food. The most dangerous food is the meek, wholegrain, vitamin-enriched breakfast cereal in the white box that’s covered in sunshine, rainbows and pictures of skinny, smiling women with gleaming teeth. Women who had even one box of breakfast cereal that was visible – anywhere in their kitchen – weighed 21 pounds more than their neighbor who didn’t.

Cereal has what we call a health halo. Their boxes are covered with phrases like ‘Contains Whole Grain’ and ‘Now with 11 Essential Vitamins and Minerals’, so we underestimate the calories and overeat it to reward ourselves for being so healthy. Having cereal on the counter adds weight to women more than to men. In fact, it had no impact on men – possibly because they’re in the kitchen less. The more time you spend at home, the more important it is to hide the food.  ‘In sight, in stomach.’ We eat what we see, not what we don’t. 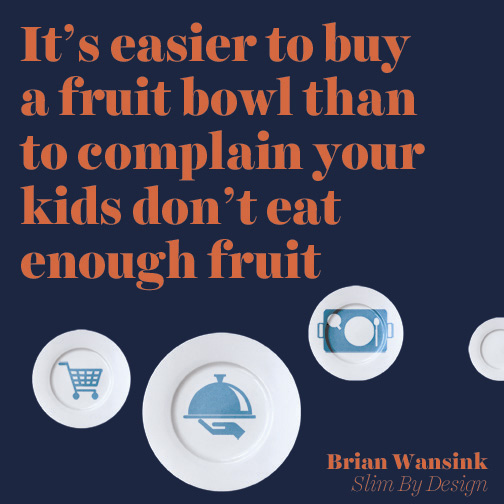 Suppose the first cereal you see in the morning is something high in sugar and the next four cereals are different versions of bark- and twig-flavoured granola. Which are you going to choose? You’re three times more likely to eat the first food you see in the cupboard than the fifth one. Rearrange your cupboard, pantry and refrigerator so the first foods you see are the best for you.

Why not just totally vanquish all tempting foods from your house? First, it’s fine to have an occasional treat yourself. Second, it’s not realistic if you have growing kids who constantly forage and bring friends over to feast. Set up a designated ‘kids’ cupboard’ that’s off-limits to you. One mother of teenagers even put childproof locks on the cupboard, for herself.

There are hundreds of easy tools that can help you become Slim by Design instead of trying to become slim by willpower. These are tools you can use in your home, your favorite restaurant, grocery store and where you work. In the end, the best diet is the one you don’t know you’re on.

Find out more in Brian's new book with Hay House UK, Slim By Design, which you can read the first chapter of below:

Brian Wansink (Ph.D. Stanford 1990) holds the John S. Dyson Endowed Chair in the Applied Economics and Management Department at Cornell University, where he is Director of the Cornell Food and Brand Lab. Previously, he was a professor at Dartmouth Continue reading