What are Ghosts? Truths and Misconceptions about Ghosts and Spirits

What are Ghosts? Truths and Misconceptions about Ghosts and Spirits

People have always been fascinated by ghosts, spirits and things that go bump in the night. Even children love the chill and suspense of a good ghost story. My own sons used to ask me to tell them such tales when they were younger, only now I think they’d be more reluctant in case they got the real thing!

The idea of anyone, or thing for that matter, returning from beyond the grave is usually seen as creepy and horrible. It is as if we’ve been programmed to think that anything coming back from death will be evil and might even want to steal our souls. Then we frighten ourselves even more with our own imaginings. Any child in a darkened bedroom can turn a white shirt on a doorknob into all sorts of ghosts and ghouls.

If only people understood the real phenomena, they could say to their children that where ghosts and spirits are concerned, there really is nothing to be afraid of and that the fear we feel comes from ourselves.

Ghostly activity can be triggered by a person who is giving off strong emotional vibes, and of course, when others learn about it, their fear level goes up and can help to set it off again. Often when the fear factor is removed, the phenomenon ceases.

Pantom-like visions seem to be programmed to play out past actions that have taken place at that spot. They are a memory trapped in time, which can be replayed, given the right conditions, just like a videotape when the ‘play’ button is pressed. 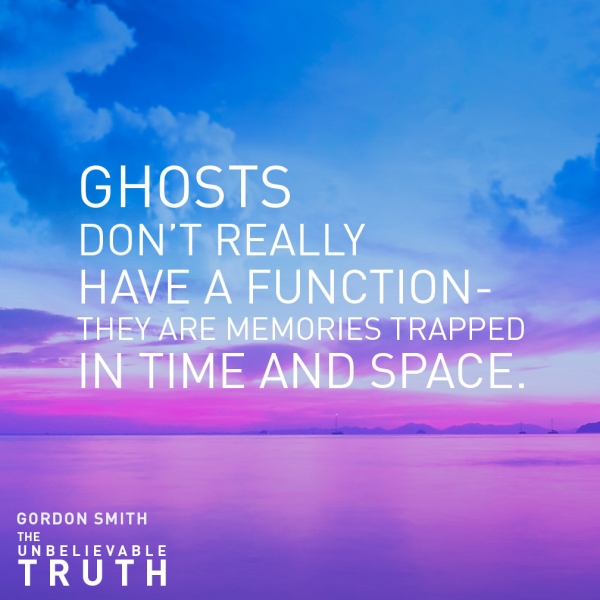 You have to wonder what could cause such a thing to happen, but most people who have seen ghosts have reported that they appear to be in a highly emotional state. If this is so, then all that is being witnessed is the stain or memory of an emotional episode in a person’s life that has left its impression on a time and place.

This, I feel, accounts for two things that often feature in sightings of ghosts. The first is the appearance of phantoms without heads, or screaming as if in pain, or appearing to be very sombre and depressed. The second is that strong emotions, such as fear, depression or rage, are often felt by the people witnessing these apparitions.

Is this because it is not only the audiovisual impressions that have been trapped but also the emotional anguish? If a person can remember their own emotional state at the time of their encounter with a ghost, it can make it easier to understand the emotional telepathy that flicked the ‘ghost switch’ and caused the videotape to be played again.

Not all reports of apparitions turn out to be of the ghostly kind, however. On some occasions the visions speak to people or give messages. These aren’t ghosts, but spirits who have returned for some reason.

I’ve often found that spirits are drawn to us in times of need in our lives. It’s not that they’re watching us every minute of the day, but it’s when we need them most that they seem to be closest to us.

Apparitions like this may be startling, but shouldn’t be seen as evil or malevolent. Cases of ‘spirit return’ normally bring comfort and don’t leave any sense of fear. If the information the spirits give is helpful, then the experience should be looked on as a completely positive one.

Truths and Misconceptions about Ghosts and Spirits

* Ghosts look like people covered with a white sheet with holes cut out for the eyes and mouth. I think that image belongs to a different kind of organization! And a ghost will never say ‘Boo!’ to frighten you.

* Ghosts come to give messages from the hereafter. In fact, ghosts don’t really have a function. They are no more than memories trapped in time and place.

* Ghosts walk through walls. If it seems as though they do, it’s only because that wall didn’t exist in their time- frame.

* Ghosts set out to frighten people. People usually become afraid because of the sudden ghostly activity, that’s all.

* An exorcism or high religious ritual will rid you of a ghost. No, the only way to stop one appearing is to find out what emotion in you set it off and to change the way you feel.

* Spirits who have returned from beyond the grave look like rotting corpses or zombies. Sometimes spirits are transparent, but usually they just look like normal people – and they certainly wouldn’t be seen dead at a haunted house!

Editor's note: Gordon Smith will be leading a two-hour session of spirit communication on Saturday 24 September at I Can Do It! in Birmingham, England. Book tickets here.