When Your Little Girl Is Called Fat

When Your Little Girl Is Called Fat

I received an email from a close friend, Victoria, whose little five-year-old daughter, Serena, had been called “fat” by a boy when they were at swim lessons. Victoria has heard me talk about the Mother Bear instinct, but was never riled up enough to experience it. Victoria told me she was a little surprised by how intensely she wanted to defend her little one.

For those of you who don’t know, all of us mamas have the Mother Bear instinct. And it does get kicked into high gear when one of our young is in jeopardy. I wrote about this in Mother-Daughter Wisdom, in case you want to learn more about it.

Victoria said that when the boy called Serena fat, she watched her daughter’s face crumble. Nothing in her short life had ever threatened her daughter’s self-esteem, and Victoria wrote to me to ask what she should do. Victoria herself remembered how hurtful kids were to her when she was younger, and didn’t want her daughter to worry about her body image before she had finished kindergarten. 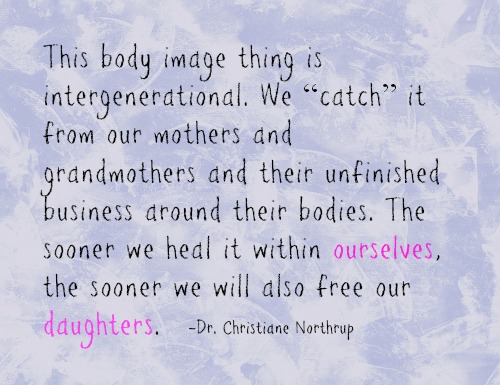 I could really relate to Victoria’s dilemma. When one of my daughters was about seven, she too was called fat by her classmates. I was beyond furious. Her paternal grandfather suggested to my husband that our daughter go on a diet. At seven!

I told my then-husband that he would permanently embed an eating disorder in our daughter if he persisted in the "restrict and diet" approach. Not ready to agree right away, he sought advice from one of my colleagues who had recovered from an eating disorder. Guess what? I won! That’s because Mama's positive influence always wins in the end.

But it still makes me want to cry, which is what mamas do. We hold the container for our children. Our hearts are that big. Victoria’s immediate response was to read Serena Beautiful Girl. And I commend her for that. They talked a little about Serena’s very special, female body. And that seemed to take the sting out of the situation. I encouraged Victoria to just keep doing what she was doing. “Damage control” like this at a very tender age will set the stage for a strong first and third chakra. I also reminded her that our children need to have these experiences in order to get strong—kind of like forces on bone that create a piezoelectric effect (a force which stimulates bone growth) that brings in the minerals. Not always comfortable. But always useful and important.

My daughter is now in the best shape of her life. She loves and appreciates her beautiful body. And I did the best "damage control" that I possibly could have back in the day. And believe me, that helps a lot! And so does having a loving, accepting father, which Serena has in spades. I know both Serena and Victoria will be fine with this kind of love and attention.

P.S. This body image thing is intergenerational. We “catch” it from our mothers and grandmothers and their unfinished business around their bodies. The sooner we heal it within ourselves, the sooner we will also free our daughters.