Why Is Quantum Biology Still Being Ignored By Conventional Medicine?

Why Is Quantum Biology Still Being Ignored By Conventional Medicine?

Newtonian principles gave way to discoveries of quantum physics more than a hundred years ago and yet biologists and medical students continue to be trained to view the body only as a physical machine that operates in a linear fashion.  Because of their Newtonian, materialistic bias, conventional researchers have completely ignored the role that energy plays in health and disease.

We have been programmed by pharmaceutical corporations to become a nation of prescription drug–popping junkies with tragic results. We need to step back and incorporate the discoveries of Quantum Physics into biomedicine so that we can create a new, safer system of medicine that is attuned to the laws of nature.

Based on the results of a ten-year survey of government statistics, iatrogenic illness i.e., illness resulting from medical treatment, is the leading cause of death in the United States and adverse reactions to prescription drugs are responsible for more than 300,000 deaths a year.

These are dismaying statistics, especially for a healing profession that has arrogantly dismissed three thousand years of effective Eastern medicine as unscientific, even though it is based on a deeper understanding of the universe.

For thousands of years, long before Western scientists discovered the laws of quantum physics, Asians have honored energy as the principal factor contributing to health and wellbeing.  In Eastern medicine, the body is defined by an elaborate array of energy pathways called meridians. In Chinese physiologic charts of the human body, these energy networks resemble electronic wiring diagrams.

Using aids like acupuncture needles, Chinese physicians test their patient’s energy circuits in exactly the same manner that electrical engineers “troubleshoot” a printed-circuit board, searching for electrical “pathologies.” Conventional biologists, on the other hand, believe that the biochemical reactions responsible for life are generated through Henry Ford–styled assembly lines: one chemical causes a reaction, followed by another reaction with a different chemical, etc.

In conventional medicine, if there is a problem in the system, evident as a disease or dysfunction, the source of the problem can be attributed to a malfunction in one of the steps along the chemical assembly line. By prescribing pharmaceutical drugs for example, the defective single point can theoretically be repaired and health restored. This assumption spurs the pharmaceutical industry’s search for magic-bullet drugs and designer genes.

The flow of information in a quantum universe is holistic: 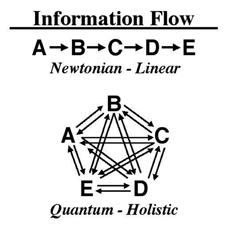 Once I realized the nature of the complex interactions between matter and energy, I knew that a reductionist, linear (A>B>C>D>E) approach could not even come close to giving us an accurate understanding of disease. Remember the atomic models you studied in school, the ones with marbles and ball bearings going around like the solar system? Let’s put that picture beside the “physical” structure of the atom discovered by quantum physicists.

If it were theoretically possible to observe the composition of an actual atom with a microscope, what would we see? Imagine a swirling dust devil cutting across the desert’s floor. Now remove the sand and dirt from the funnel cloud. What you have left is an invisible, tornado-like vortex. The atom has no physical structure—the emperor has no clothes!

One of the most ingenious characteristics of the body’s sophisticated signaling system is its specificity. If you have a poison ivy rash on your arm, the relentless itchiness results from the release of histamine, the signal molecule that activates an inflammatory response to the ivy’s allergen. Since there is no need to start itching all over your body, the histamine is only released at the site of the rash.

Similarly, when a person is confronted with a stressful life experience, the release of histamine within the brain increases blood flow to the nervous tissues, enhancing the neurological processing required for survival. The release of histamine in the brain to deal with stress behaviors is restricted and does not lead to the initiation of inflammation responses in other parts of the body. Like the National Guard, histamine is deployed only where it is needed and for as long as it is needed.

Most of the Medical Industry’s Drugs have no Specificity

On the contrary, when you take an antihistamine to deal with the itchiness of an allergic rash, the ingested drug is distributed systemically. It affects histamine receptors wherever they are located throughout the whole body. Yes, the antihistamine will curb the blood vessels’ inflammatory response, dramatically reducing allergic symptoms.

However, when the antihistamine enters the brain, it inadvertently alters neural circulation that then impacts nerve function. That’s why people who take over-the-counter antihistamines may experience allergy relief and also the side effect of feeling drowsy.

Medical doctors are caught between an intellectual rock and a corporate hard place; they are pawns in the huge medical industrial complex. Their healing abilities are hobbled by an archaic medical education founded on a Newtonian, matter-only universe. Unfortunately, that philosophy went out of vogue seventy-five years ago, when physicists officially adopted quantum mechanics and recognized that the universe is actually made out of energy. Most biological dysfunctions (except injuries due to physical trauma) start at the level of a cell’s molecules and ions. Hence the need for a biology that integrates both quantum and Newtonian mechanics.

The Quantum Biology Revolution is Consumer-Driven

I believe the major reason why energy research has been all but ignored comes down to dollars and cents. The trillion-dollar pharmaceutical industry puts its research money into the search for magic bullets in the form of chemicals because pills mean money. If energy healing could be made into tablet form, drug manufacturers would get interested quickly.

We are already in the midst of a very slow shift in medicine, propelled by consumers who are seeking out complementary medicine practitioners in record numbers. It’s been a long time coming, but the quantum biological revolution is almost here. The medical establishment will eventually be dragged, kicking and screaming, full force into the quantum revolution.

To learn more, see my book, The Biology of Belief.