Will You Deteriorate With Age Or Grow Old With Gusto?

Will You Deteriorate With Age Or Grow Old With Gusto?

The Secret Prescription for Radiance, Vitality, and Well-Being

Editor's Note: Dr. Christiane Northrup, the author of this artcle, will be speaking about Goddesses Never Age at I Can Do It! London 2015 this September in the UK. Click here to learn all about his talk and to book your ticket to the event.

The soul is ageless, and it’s an expression of the divine, feminine creative force of the universe. The sacred feminine has traditionally been associated with darkness, the body, mystery, fertility, receiving, and the primordial soup—the womb in which all life begins and is nurtured. Every woman is an ageless goddess, an expression of the sacred feminine physical form. Unfortunately, we often forget this in the onslaught of ageist cultural messages. We need to be more aware of our culture’s negative messages about growing older and make a conscious effort to reject them.

Clinical neuroscientist Mario E. Martinez, Psy.D., the founder of the Biocognitive Science Institute, has written about cultural expectations, or what he calls “cultural portals,” that we internalize—such as turning 30, or 50, or 65. Dr. Martinez says that you should always refuse the senior discount because it just reinforces the false belief that you’re growing older and more frail, that you can’t work and need to be taken care of by others.1 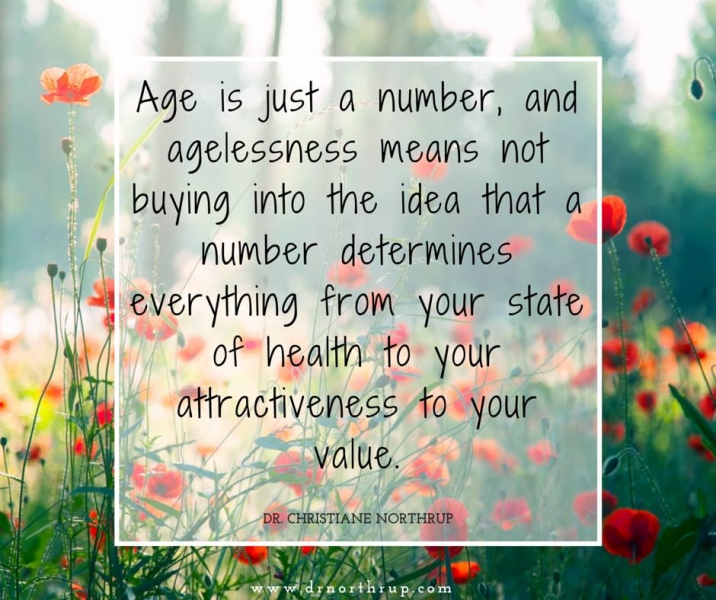 My brother recently discovered the truth of this when he decided to take the discount on a flight to save $25. When he got to the airport, he had to stand in yet another line to prove that he was indeed a senior. He said he ended up feeling like a second-class citizen, which was certainly not worth saving $25.

My mother, who is nearly 90, got in trouble for not signing up for a Medicare drug prescription plan. She didn’t see any reason to do so because she’s not on any drugs and doesn’t plan to be. Do you want to spend your 65th birthday thinking about what diseases and ailments you’re likely to develop so you can choose which prescription drug plan will be right for you? Why is that the cultural portal you’re expected to walk through?

It’s probably because back in the 19th century, 65 was chosen as the retirement age that qualified people for a state pension, as that was the average life expectancy. Since then, actuarial charts and statistics have solidified the age of retirement somewhere around 65, give or take 5 years, but now the life expectancy after age 65 is 24 years! So why continue to expect to wind down at age 65? Or 75, or 85, or any age?

If you aren’t thinking about how old you are at the moment, then a milestone birthday, or a lifestyle-related illness of a same-age friend or relative, or a crisis in your life might make you reflect on how you could change your script and get older without deteriorating. Many women call my radio show “Flourish!”  to get my advice because they’ve suddenly developed an autoimmune disorder, a precancerous or cancerous condition, or allergies. If it’s not a health crisis that’s thrown them off course, it’s the loss of a job or a relationship or an illusion. Sometimes they tell me they have just found out that their husband has been cheating on them or their college-age son or daughter has a mental illness or a substance abuse problem. Our souls design many potent wake-up calls to get our attention back on track.

And of course “the change,” as menopause used to be called, is a natural transformation point in a woman’s life. We are meant to begin life anew around the biological marker of our last menstrual period. Our bodies know it, even when our minds don’t. Or maybe you aren’t yet aware of a desire to make changes. The natural shift in focus women experience can often come on unexpectedly—just as perimenopause does. One woman I talked to said her first hot flash was so unexpected and intense that she scolded her husband for giving her a cup of fully caffeinated coffee instead of decaf—she assumed that had caused the sensation. When he said, “Maybe you’re having a hot flash. Aren’t you around that age?” she was stunned into silence. Women often don’t think about perimenopause until they are in it, or a girlfriend or sister around the same age enters it. Am I that age already? they wonder. Really? And then, So what does this mean for me? What am I going to create in the next chapter of my life? What am I changing into?

What you are changing into is the powerful, luscious, fertile, ageless goddess you were meant to be—an expression of the divine, feminine life force unencumbered by cultural expectations that keep you small, overly cautious, and afraid to upset anybody. You are in the process of discovering your ageless goddess self, and she has many ways to express her creativity and experience the pleasures in life, from feeling good in her body and rediscovering her sexuality to beginning a new relationship, project, or way of living.

Goddesses Never Age is my new book for women of any age who are enjoying their lives today and are eager to experience how life can get even better. I didn’t want to write a health book for women that would scare them about growing older and tell them how to prepare for every awful thing that could happen to them, from disease of the breast to the heart to the uterus. I didn’t want to carve the female body into pieces and tell women to use these ten tips to make sure that this piece doesn’t fall apart or to make sure that system doesn’t go haywire. I am so over that approach to health.

If you want specific advice on how to have healthy breasts, how to nourish your body with good, wholesome foods, and how to keep yourself looking fabulous year after year, you’ll find all that in Goddesses Never Age. However, you will also find ideas that will challenge you to let go of the myths about women and our relationships with each other, our bodies, and the earth—myths that women have internalized and that age them.

So are you going to grow older with gusto or deteriorate with age? Will you stick with the old paradigm of battling the body to get it to behave itself? Will you continue putting other people’s needs ahead of your own and fueling yourself with processed foods, sugar, caffeine, anxiety, and sheer willpower? Or will you get off the road that leads to illness, frailty, and reduced quality of life and start living courageously, as if you really mean it?

Getting older is not something to fear. Whenever you take an adversarial attitude toward something, you give it power. Instead of being fearful and resistant toward growing older, invoke the magical principle that knowing something’s name gives you power—not over it but with it, as the author Starhawk says. Then you can become a neutralizing force. You can make growing older a different experience. Then you won’t be old and you won’t be young. You’ll be “something else”: an ageless goddess.

Christiane Northrup, M.D., is a visionary pioneer and the world’s leading authority in the field of women’s health and wellness. A board-certified OB/GYN physician who graduated from Dartmouth Medical School and did her residency at Tufts New Engl Continue reading

There are seven great initiations every human bein

Abraham speaks on the subject of our ideas of self

Baje’s story made me acutely aware of the differen

Does this sound familiar? You purchased a coat a c

Service to all sentient beings starts with your fa

In many of my lectures and workshops, I often talk

My best friend Billy Leonard and I were inseparabl